From Command & Conquer Wiki
(Redirected from Invasion Of Egypt)
Jump to: navigation, search

The Invasion of Egypt is the second mission of the Nod campaign in Tiberian Dawn.

The GDI had mantained a stranglehold on Egypt for many years.  However with the outbreak of the First Tiberium War and with Nod securely in control of Libya an opportunity had arisen for Nod to 'liberate' Egypt from GDI rule.

The most crucial events of the invasion involved Nod deploying 'expendable' light troops (ablait with MCVs) who sneaked in through the Egyptian border from Libya. These troops engaged GDI forces near the towns Al-Alamayn and Al-Kharijah. Mining local Tiberium supplies they were able to defeat all the GDI forces in the areas and establish forward attack posts. The GDI forces were poorly armed and did not enjoy air support. Based upon this and Egypt's high military strength and resistance ratings it could be surmised that the Nod invasion of Egypt came as a surprise to the GDI who may well even have deployed their Egyptian forces elsewhere, possibly in Europe.

With both attack posts established the main Nod assault swept into Egypt destroying the remaining GDI forces and a Nod supporting regime was installed in Cairo. 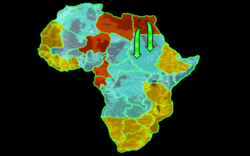 With Egypt secured Nod forces were free to move into Sudan.

The Invasion of Egypt was a pivotal event in the First Tiberium War, it gave the Brotherhood total control over a powerful and populous country over which the GDI had maintained a stranglehold for years and provided them with an excellent powerbase. Nod's victory in Egypt provided them with a excellent new base of operations and opened up many new opportunities for the acquisition of other African countries.

It also gave Nod control over the Suez Canal and thus over much international trade and the revenue from it.  At the same time GDI ships would be unable to use the canal to supply naval support, reinforcements and supplies to their forces in Ethiopia. Perhaps as a result of this Nod forces would upon capturing Sudan gradually drive GDI forces out of Ethiopia.