The Invasion of Earth refers to the attack on Earth conducted by a Scrin harvesting force during the Third Tiberium War.

The destruction of Temple Prime with the GDI Ion Cannon had detonated a Liquid Tiberium Bomb inside the building, causing a massive Tiberium explosion. It was not until later that it was revealed that Kane had knowingly provoked GDI into using the Ion Cannon to detonate the bomb, which he knew would attract the attention of a Tiberium-based extraterrestrial race, known as the Scrin.

Shortly after the Siege of Temple Prime, GDI deep-space satellites picked up motion on the edge of the solar system. This turned out to be a fleet of non-terrestrial ships, headed for Earth at "near-relativistic" speeds. Director Redmond Boyle of GDI ordered an Ion Cannon strike against the invaders with all cannons orbiting over the southern hemisphere.

However, the alien's aircrafts merely dispersed into multiple smaller craft, landing in Red Zones around the world. Scrin forces began constructing massive Threshold towers in the world's Red Zones, but still for unclear purposes. At the same time the Scrin began attacking major population centres - GDI and Nod alike - with a ferocity unmatched before or since.

Shock troopers stormed every major Blue Zone cities like London. Kane went underground, although he continued to issue orders to his most trusted associates, including LEGION and Alexa Kovacs, while plotting his next move. Meanwhile in Australia, Kilian Qatar assumed leadership of the Brotherhood after GDI reports that Kane had been killed in Sarajevo. 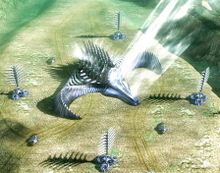 In Europe, the Scrin destroyed many major blue zone cities in GDI territory - London and Berne being just two of the most publicised, horrifying cases for the GDI Central Command. At the same time, New Eden in Germany, the crowning achievement of GDI's Tiberium eradication plan, and a vital research hub, fell to the invaders.

Though Munich was destroyed, the GDI Commander managed to guide the researchers to safety. Here GDI discovered that Sonic emitters, designed for the destruction of Tiberium, had a powerful effect on the Scrin, damaging them severely. Exploiting this weakness, GDI set to work retaking the destroyed region of Stuttgart with a GDI commando, Lieutenant Fullerton rallying his pinned down GDI troops to victory in the city. Later GDI victories followed at Cologne and Berne.

The Scrin also operated elsewhere in Europe, most notably in Croatia, where they came into conflict with both GDI and Nod forces. At the time when the Scrin were losing momentum and became suspicion about the permature levels of Tiberium contamination, they found out that Kane had lured them to Earth under a man-made Liquid Tiberium explosion but not even they could determine Kane's true origins.

Although Kane saw the Scrin as "visitors", not "invaders", LEGION was nevertheless forced to deal with the Traveler-59 subfaction which arrived and started to mind control the Nod-friendly population in the African Red Zone. When LEGION started to destroy their Drone Ships the Scrin brought in an Eradicator Hexapod as its reinforcements. LEGION countered it by deploying Nod's own Redeemer to take out this alien behemoth.

In China, both GDI and Nod factions fighting over the Tacitus were ambushed by a division of the Scrin's dreaded Reaper-17 subfaction. Meteors laden with Tiberium rained down on the city followed by a rampage of the Cult of Reaper's most feared units.

With Kane apparently dead in Sarajevo, Kilian Qatar becomes the de facto leader of Nod although she was suspected of starting the rebellion at Temple Prime. She recalled all Nod personnel to fight in the last stand in Australia, vowing to retake the world one continent at a time. While a Nod team sent by General Qatar was busy hijacking GDI nuclear weapons in transit from the Outback to the main base in Sydney, they were ambushed by the Scrin invasion force which attacked GDI and Nod indiscriminately after Ajay, the Nod intelligence officer contacted the Commander about the bad news after capturing the last GDI convoy. Nevertheless, the nuclear weapons were secured.

Kilian Qatar saw that the most logical option was to ally with GDI against this new terrifying enemy, and aided them in the defense of Sydney (while taking the opportunity to steal the nuclear launch codes from GDI). Despite the GDI-Nod Alliance, the Scrin broke through the city's defenses and a hasty evacuation of Sydney was ordered. While GDI struggled to hold their ground, the Nod forces received an order from the recently resurfaced Kane alive to destroy the GDI forces. The GDI defenders were obliterated with a nuclear missile. Afterwards, Kane reasserted his leadership of Nod at Ayers Rock.

End of the Invasion[edit | edit source]

With the alien assaults repulsed, both GDI and Nod were now ready to venture into the Red Zones. By this time GDI realised that the attacks on the cities were just a diversion to draw attention away from the Threshold towers. A GDI Commander demonstrated to the rest of the world that the towers can be taken down with the fall of the tower in Rome. In the meantime, Nod operated to capture a tower themselves.

The ensuing Italian Campaign culminated in the Battle for Kane's Tower and the Battle for Ground Zero. with Kane capturing the only completed Threshold and GDI destroying the Relay Node, depriving the alien units of their Tiberium radiation, killing them. Foreman 371, however, had escaped through the same Threshold to the Ichor Hub.