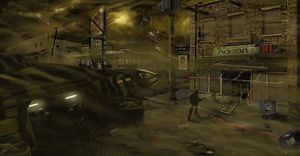 An Orca Transport has made an emergency landing to wait out the Ion Storm. 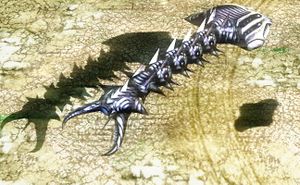 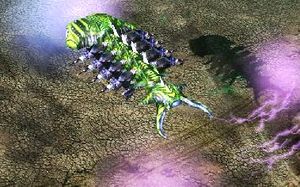 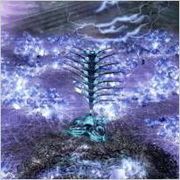 An Ion Storm is a violent and unpredictable weather effect caused by Tiberium.

Ion Storms are caused by the presence of Tiberium based gas in the atmosphere. When the saturation of Tiberium in the air reaches a certain level, the chance of a devastating electrical storm called an Ion Storm rises. It is unknown precisely what factors trigger an Ion Storm. The Ion Storms proliferate in areas of heavy Tiberium contamination, in particular areas where the Veinholes are present.

Regardless, when the Ion Storm begins, the sky is obscured by Tiberium gas clouds and lightning strikes proliferate. Random meteorite strikes may also take place. The most dangerous effect of the Ion Storm is that it renders all radar imaging inactive due to electromagnetic interference as well as the build up of electrical charges in the atmosphere literally knocks aircraft from the sky. (all aircraft, including Orcas, Harpies and Banshees) In addition, all hovering vehicles crash to the ground (or drown if they are unfortunate enough to be over bodies of water).

Most ground equipment and vehicles continue to function properly though, but run the risk of getting struck by a powerful Ion Storm lightning bolt. In 2030, an Ion Storm kept the Kodiak grounded while Nod forces launched an attack to destroy the command craft. Later, during the Firestorm Crisis, an Ion Storm caused the Kodiak to crash, when a giant bolt of lightning hit it, as well as preventing any communication between GDI ground forces on Earth with the GDSS Philadelphia. An Ion storm also killed Ignatio Mobius and his crew. To protect its personnel as well as civilians against ion storms, GDI has built a number of storm shelters in populated areas.

During the Third Tiberium War, observations of the alien Scrin led GDI field operatives to believe that the extraterrestrials could in fact artificially generate localised Ion Storms. They even appeared to possess an aircraft with this precise ability - the Planetary Assault Carrier. The Storm Columns also use Ion Storms as their defense against everything.

Ion storms can be caused via the detonation of Green and Blue Tiberium. Ion Storms can happen if a Scrin Harvester has Tiberium inside and is destroyed, causing a very fast Ion storm.