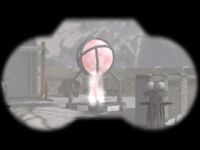 The Iron Curtain, named after the metaphoric boundary that separated the Western and Eastern blocks in the Cold War era, was a Soviet superweapon that could render one Soviet unit invulnerable for a period of time.

The exact details of this technology are classified and unavailable. It is possible that the Iron Curtain was based upon research conducted by Nikola Tesla, in the development of his Death Ray Transmitter device, as a possible counter and control device.

It was reported in the wartime newspapers between 1930 to 1940 that Tesla was working on a device which could throw a veritable Chinese wall of incredible energy powerful enough to withstand anything. After the NKVD stole his papers, it is possible that Intelligence Officer Nadia ordered the development of the Iron Curtain Project. The secrecy level maintained was such that even Stalin was initially unaware of its existence.

The Iron Curtain focused a considerable amount of energy onto the target units, causing a darkening of the affected units. The effect would last for a short amount of time, approximately a minute, and then the effect would fade from the target unit. During this time, the unit could absorb unlimited amounts of damage from any weapon, standard or experimental, without any ill effect. As the Iron Curtain devices went through redesigns, they could affect more units.

A protected vehicle cannot be chronoshifted.

The Iron Curtain structure was a suspended metal ball on a base. Energy was fed from the base of the structure to the ball. A charging mechanism was included in the base, and once enough energy had been built up, it was ready to be used upon Soviet armoured units.

Unfortunately, even the power of the Iron Curtain was not enough to stop the massive waves of tanks that the Allies sent against the Soviets, and the Allies were able to move on Moscow. Before they did, however, the Allies spent a considerable amount of effort into destroying the prototype, the research base, and any technology related to the Iron Curtain. The Soviets got a few online despite this effort. The Allies destroyed one that was blocking the way into Moscow but the Soviets already had two in Moscow.

During the Third World War, Alexander Romanov secretly developed an improved Iron Curtain that he deployed near the Kremlin to defend Moscow from the Allied offensive realized through the Chronosphere. Despite this, the Soviet Union was defeated.

In the Soviet campaign, Yuri finished the reconstruction of the Iron Curtain device, also near the Kremlin, and was used to defend his supposed presence in Moscow after the Soviet commander discovered his treachery.

The Iron Curtain proved a useful tool against Yuri for the Soviets during the Psychic Dominator Disaster, as the power of the Iron Curtain not only rendered a unit invulnerable, but also rendered it incapable of becoming mind-controlled by any psychic unit or structure, even the Psychic dominator, during the time the unit was affected. 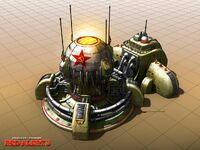 In the new timeline created by the Soviet time travel, the Soviets again utilised the Iron Curtain. While its main feature was not changed, its appearance was. The ball - as seen in the Third World War's first iterations - was now encased in armour and did not suspend in the air anymore. Instead, the ball was connected to the base structure with thick cables.

The Iron Curtain is, of course, named after the imaginary barrier that divided Europe between the capitalist Western states and those dominated by the Soviet Union in the East. The real world Iron Curtain was more of a well-defined and -enforced border than an actual physical barrier, though in some sections like the Berlin Wall that divided East and West Germany, the two sides were physically demaricated and separated.

In Red Alert 3 and Uprising, the Iron Curtain is the only support superweapon that was built when fighting AI enemies. The Allied AI would not not build a Chronosphere and the Imperial one would not build a Nanoswarm hive.