It Came From Red Alert! 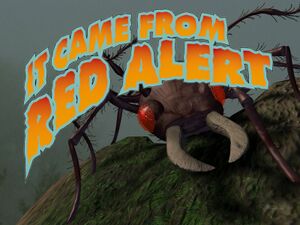 It Came From Red Alert! was a secret campaign from Counterstrike taking place after the Allied victory over the Soviet Union.

When the Soviets were defeated, several unidentified animals came out of nowhere for the victorious Allies - Giant Ants. The Allied Commander was given orders from Ben Carville on the pressure of Allied leaders to eliminate the ants, in spite of the latter's reluctance to believe in their existence. It was discovered that the ants came out of a deserted Soviet base somewhere in Europe and the commander was ordered to exterminate them.

The campaign can be played when the player holds down the Shift key while clicking on the speaker graphic in the main menu of the game. This applies for both when the Counterstrike expansion pack is installed, and the Remastered Collection.