Surveillance footage of the King Oni's primary and secondary functions

No one yet knows exactly how the Empire of the Rising Sun managed to keep its outlandish army a secret for so long. The Soviet Union was taken especially by surprise, as her borders were among the first to be darkened by the Empire's shadow. 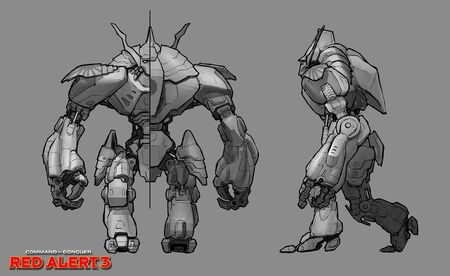 The Imperial King Oni is assumed to be the single most heavily armored, most powerful ground vehicle in use by the Empire of the Rising Sun.

When the Empire finally revealed its military might, many top military aides in the Soviet Union quickly resigned in embarrassment, while others were incarcerated (or worse) for failing to gather sufficient data on their new enemies. Some maintain that reasonable human error caused the world's greatest military minds to fail to detect the development of Imperial forces purely designed for ambush. However, there is no satisfying explanation for how a monstrosity such as the King Oni could have been overlooked by the global intelligence community's top aides and agents until this massive battle-walker was already being put to use on the front lines. How could such a preposterous weapon, which flies in the face of decades of conventional mechanized warfare, have been developed purely in isolation? The only explanation that makes any sense is that the Allied nations and the Soviet Union were so embroiled in their own conflict that they became oblivious to the storm brewing in the far east; a storm best characterized by the unbelievable visage of the King Oni. 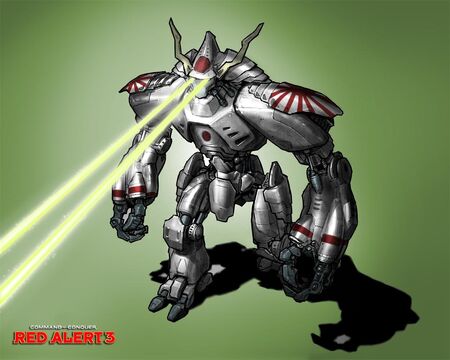 The King Oni can kill with a glance.

It remains unknown why the Japanese military was compelled to design such an unorthodox fighting machine as this humanoid-shaped construct, which stands approximately six stories tall and evokes images of a mechanical, hulking ogre. However, battlefield performance reports of this vehicle are very sobering, and suggest that its bizarre form factor is not merely a play against enemy morale. Indeed, the King Oni's combat capabilities alone are more than enough to dampen an opposing army's spirits. The "eyes" of this robot conceal energy weapons that can reduce a tank to molten ruin in seconds. And the King Oni is remarkably capable of fighting with its own body, using its massive arms and shoulders to crush anything that stands in its way. An early battlefield report involving the King Oni suggested that just one of these robots, when faced with an entire tank platoon, simply charged the main battle tanks head-on. Their shots deflected off of the King Oni's white armor (which must be some sort of new compound), even as it barreled into the tanks, simply crushing them underfoot as though they were children's playthings.

We do not know if this is a piloted, remote-controlled, or autonomous vehicle because one has yet to be recovered or disassembled. The only thing that seems obvious about the King Oni is its combat proficiency. Military strategists surmise that it is almost impossible for the Empire of the Rising Sun to have constructed more than a handful of these remarkable machines. However, their credibility these days seems to be somewhat dubious.

Battlefield reconnaissance has revealed at least these facts about the King Oni: