Surveillance footage of the Kirov Airship's primary and secondary functions

The unprecedented new Kirov Airship symbolizes the Soviet military's sheer size, strength, steadfastness, and, some might say, its propensity for excess. Named for its maiden launch over Kirov oblast, this dirigible is specially-built for war. A rigid, unbreakable frame and heavy-duty envelope make the massive vessel virtually indestructible, and its oversized cargo hold packs thousands of armor-piercing bombs, while an industrial-strength engine block and maneuver props somehow keep the thing aloft. By contrast with some other more-conventional Soviet forces, no expense was spared in either the design or the manufacture of these flying behemoths. Krasna Aerospace introduced the Kirov into the Union's arsenal only two years ago, and already it has changed the way modern air combat is waged, while silencing critics who once accused Krasna's past success with its Twinblade gunship to be a one-time fluke. 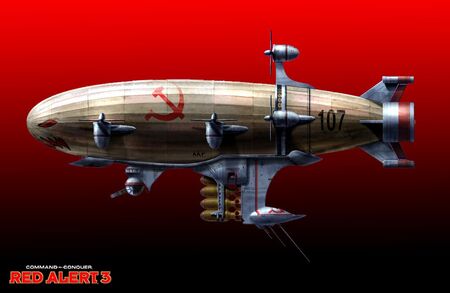 The Kirov Airship is designed to fill the Soviet Union's citizens with pride while instilling fear and dread in her enemies before blowing them to smithereens.

Given its pure role as a heavy bomber, the Kirov's only real shortcoming is its inarguable lack of speed--a problem that is partly resolved by the Kirov's posh living quarters and spectacular panoramic viewports, which let their prestigious pilot-bombardiers blissfully pass the time while their aircraft steadily trudge along toward their unfortunate targets. Along the way, Kirovs are able to simply shrug off most anti-aircraft fire, including attacks from enemy fighters. It is true, though, that Kirovs have no means of retaliating against enemy aircraft, so the Union does tend to send escort fighters of her own to watch over each mighty vessel, just in case. Further, Krasna Aerospace has equipped this year's Kirov models with special fuel injectors that provide the airship with a significant burst of speed, though this is used sparingly for safety reasons.

Of course, the greatest safety concern lies with the Kirov's enemies. Even but one such gigantic vessel has within it the capacity to bring ruin to an entire military installation or enemy armor division. As if this weren't enough, recent reports claim that the Soviet Union is now exploring new ways of mass-producing Kirovs in an offshore plant, while fitting them with even more powerful munitions. Such reports may well be false. For example, there is simply no physical way a Kirov could be built from a Soviet war factory, despite insistent speculation that one of these tank plants--so common on the Soviet front--has within it the capacity to launch aircraft. 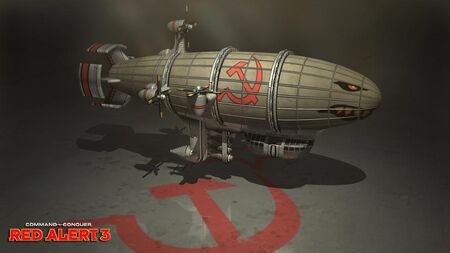 Soviet officers of the highest standing fly each Kirov, enjoying world-class dining and accommodations as well as nigh-unlimited supplies of bombs.

Predictably, Kirov Airships are flown only by the most decorated Soviet officers with years of good political standing, who enjoy lavish accommodations and fine dining inside the Kirov's 200-square-meter living quarters. Even so, stories abound about the ruthlessness of Kirov pilot-bombardiers, who--if the psychological profiling is to be believed--are so impatient for combat yet feel so removed from it that they tend to use their bombs with liberal, merciless abandon.

Battlefield reconnaissance has revealed at least these facts about the Kirov Airship: