The Kodiak was a Orca Command Vehicle made famous for its role as legendary GDI commander Michael McNeil's personal flagship during the Second Tiberium War.[1]

During the Second Tiberium War, the primary flagship for GDI commanders was the Orca Command Vehicle (OCV), a large VTOL aircraft capable of low Earth orbit.[1] These vessels served as mobile command centers, allowing commanders to travel from battle to battle, observing battles from afar so as to not endanger the commanding officers. The Kodiak was the OCV assigned to Commander Michael McNeil, piloted by lieutenant commander Chandra, McNeil's second-in-command.[2]

On September 2, 2030, the Brotherhood of Nod suddenly launched a series of attacks on GDI bases worldwide. Kane, thought to be killed during the final battle of the First Tiberium War, revealed himself to GDI's chief commander, General James Solomon. In response, Solomon called into action Commander Michael McNeil.[3]

At GDI's Southwestern training facility, McNeil, who was practicing his combat skills at the time, was interrupted by Chandra, who had already prepared the Kodiak for takeoff. Inside the Kodiak, Solomon briefed McNeil on the Nod attacks and informed him of Kane's return. He ordered him to secure Phoenix Base, which was under heavy Nod attack.[3]

Throughout the war, the Kodiak brought McNeil to battlefields across the world. During the mission to destroy Nod's chemical missile plant, the Kodiak came under attack by Nod Banshees, but managed to survive. In retaliation, GDI destroyed the hidden Banshee hangar that launched the attack - along with the Banshees still inside - using Disruptors.[4]

After Umagon was captured by Nod, the Kodiak was grounded by an ion storm. Taking advantage of this opportunity, Nod launched a direct assault on the Kodiak, but McNeil was able to defend the Kodiak and eliminated the Nod attack force.[5]

After McNeil defeated Kane's forces in Cairo and impaled Kane with a piece of rubble, the Kodiak evacuated McNeil, the Tacitus and Umagon from Kane's crumbling Pyramid Temple. Onboard the ship, Tratos administered an experimental serum to Umagon, which would either reverse the effects of Kane's Tiberium experiments on her or kill her.[6] 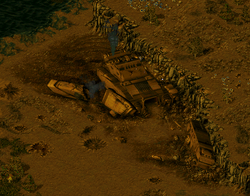 Shortly after Kane's defeat at Cairo, Tratos contacted GDI researcher Dr. Gabriella Boudreau, telling her that his serum had failed and that Tiberium mutation had driven Umagon mad. He asked Boudreau to bring all of Kane's archives and the Tacitus to him in order to find a solution. The Kodiak, once again piloted by Chandra, was requisitioned for this mission.[7]

Under heavy sniper fire from Nod, the archives and the Tacitus were loaded onto the Kodiak, and it took off without incident. However, it was struck by an ion storm lightning while en route to Tratos' compound and crashed on the coast of North Africa, killing everyone on board.[7]

Following the Firestorm Conflict, GDI ceased development of large-scale airships due to their high manufacturing and maintenance costs, and the remaining Orca Command Vehicles were mothballed. However, in the aftermath of the Third Tiberium War, the GDI Council rethought this position, since the existence of heavily armored Scrin spacecraft, such as Devastator warships and Planetary assault carriers, highlighted the need for large-scale air superiority.[1]

After six years of stop-start development, the new Kodiak-class battlecruiser was unveiled in 2068. Unlike its command-orientated predecessor, the Kodiak-class was a heavily armed warship, capable of engaging both ground and air targets.[1]