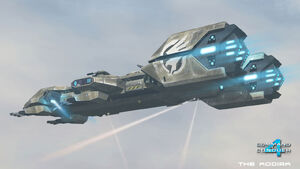 During the Second Tiberium War, the primary flagship for GDI commanders was the Orca Command Vehicle, or OCV, a large VTOL aircraft capable of low Earth orbit; the most notable being the Kodiak, lead by the legendary Commander Michael McNeil. While very effective, the OCV was also incredibly expensive to build and maintain. As such, GDI opted not to continue the development of large-scale airships in the aftermath of TW2, mothballing the OCV and focusing on the smaller Orca gunship and Firehawk aircraft.

It wasn't until the aftermath of TW3 that the GDI Council rethought this position. Scrin Devastators and Planetary Assault Carriers were powerful enough to devastate even the most heavily defended GDI installations and were more than capable of withstanding prolonged anti-aircraft fire. Once the smoke cleared, the renewed need for large scale air superiority became self-evident, as even GDI's storied Mammoth Tank were less than capable against a heavily armored aerial opponent. With the initial construction of the Tiberium Control Network already underway, the GDI Council was able to free up enough resources to order the development of new aircraft proficient enough to match (or better) their Scrin opposite numbers.

It would take six years of stop-start development, but in 2068 GDI finally unveiled the new cornerstone of their first fleet, the Kodiak-class battle cruiser; both named for and visually similar to McNeil's renowned craft, but, outside their shared low Earth orbit capabilities, quite different in terms of role. Unlike its command oriented predecessor, the Kodiak-class was primarily designed to be a warship - to this end, the Kodiak is armed with nine 24" guns grouped into three turrets, reminiscent of the early 20th century battleships. In addition, the Kodiak can fend off other aircraft with an array of Vulcan cannons.

The Kodiak-class first saw combat in 2069, when the GDIS Michael McNeil destroyed fortified Obelisk defenses surrounding a key separatist base in Africa, enabling GDI ground troops to secure the area with minimal casualties. Since its introduction, the Kodiak has enjoyed tremendous success, striking fear into the heart of the Separatists and giving pause to those who would undermine the GDI-Nod Alliance. 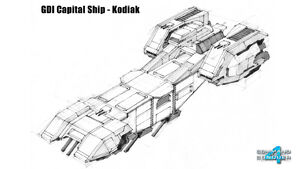 The Kodiak is armed with nine 24" guns, capable of obliterating any and all opposition on the ground. Each gun fires in turn and the shells are further accelerated by gravity, creating an enormous crater at the site of impact. Mounted on the underside of the Kodiak, the guns can quickly rotate to fire at anything below, but cannot engage other aircraft. Additionally, the forward turrets cannot rotate a full 360 degrees, so gunship escorts are typically required to screen the Kodiak’s rear.

Mounted on the roof of the Kodiak are three Vulcan turrets with two cannons each. Although not technically an air superiority vessel, the Kodiak can hold its own against air patrols and light aircraft, but as the turrets are mounted on the top of the ship, these guns cannot be used against ground targets. Combined with its armor and other armament, the Kodiak boasts a complete package, able to handle most anything the enemy throws at it.

Recently, Kodiaks are being upgraded with power redirection circuits and "Lightning" Armor to help improve their survivability against laser weaponry. Lightning Armor, as it is commonly called, strengthens itself proportionate to the electric current that is passed through it; the helmsman can engage power redirection circuits to activate the armor by rerouting the primary power from weapons systems. Some of this power is also routed to the engines to grant the Kodiak a speed boost, and helmsmen are being trained in defensive maneuvers to take advantage of the increased speed and armor. 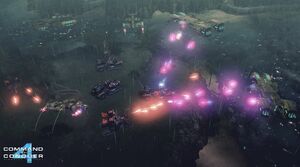