A LASER (Light Amplified by Stimulated Emission of Radiation) is a coherent beam of light radiation. Light of a specific wavelength is amplified and "bounces" off a series of mirrors inside the laser through a "gain medium", until a portion of the light is passed through the laser and is directed as a beam outward. Lasers have been used to store optical data (such as that on a CD).

The Allies, Yuri's army and, prominently, the Empire of the Rising Sun has another use for laser technology: weaponry. They, to this end, have used lasers for military purposes, such as, for example, targeting or direct destruction. 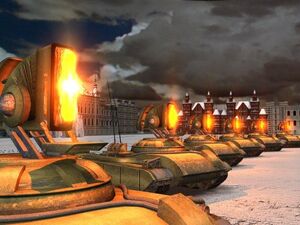 The WWIII-era Prism tank is the extreme end of Allied LASER military applications.

The Prism Beam is a form of laser developed by Albert Einstein to counter the USSR's Tesla Coil. It has a long range and high destructive rate, making the Prism beam, to put it bluntly, a deadly threat to any infantry or base defense on the battlefield. Units armed with Prism weapons were the Prism Tower and the Prism Tank.

The Allies make extensive use of laser technology during the WoTP - such as the Guardian Tank's pinpoint laser, the Athena Cannon's targeting laser and the Javelin Soldier's lock-on lasers. FutureTech Corporation also developed many laser-based weapons, such as the Spectrum Tower and the Mirage Tank's Spectrum Cannons. The new Future Tank X-1, deployed during the events of Red Alert 3: Uprising, is also armed with Riot Lasers, capable of cutting through even Apocalypse Tanks. 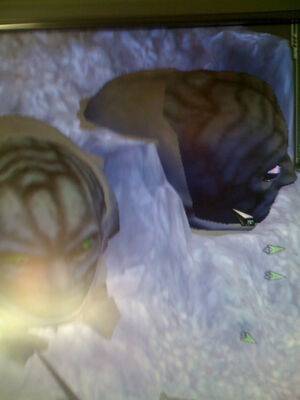 The Mt. Rushmore Laser Defense Bases are, to put it bluntly, hollow mockeries of the American presidents of old.

During Operation "A Monument to Madness", President Howard T. Ackerman, in order to make sure the Mt. Rushmore Superweapon was safe from enemy attack, namely Allied Loyalist attack, converted the heads of Washington, Abraham and Jefferson into Defense Bases, eyes outfitted with these direct-energy weapons that can instantly fry any infantry and any vehicle its beams make contact with. They were, however, deactivated by Loyalist Engineers, directed by none other than the Allied Commander.