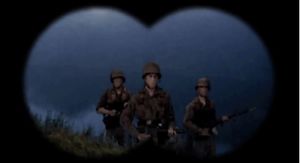 The M16 is a lightweight, 5.56 mm caliber, air-cooled, gas-operated, magazine-fed rifle, with a rotating bolt, actuated by direct impingement gas operation. It is constructed of steel, aluminum and composite plastics, and is easy to break down and clean with proper training.

It first entered service during the Great World War II, with the Allies using it extensively to replace various older weapons, such as the M1 Carbine and StG-44. Eventually, an under-slung grenade launcher, designated M203 was developed as an optional addition to the rifle. The 5.56mm rounds utilized by the M16 is ineffective against armored vehicles while the under-slung 40mm grenade launcher could damage lightly armored vehicles.

Later, this weapon also had a special carbine version designated as the M4. It used the same internal mechanisms as the original M16, but had a shortened barrel, collapsible stock and was primarily designed as a more compact version of its big brother. It could also have an M203 grenade launcher mounted to it.

Following the war, the rifle went into widespread production within many countries, and was widely sold on international markets. Decent reliability and good accuracy in short bursts attained on newer M16A2, have led to the rifle's adoption for use by Nod's light infantry during the onset and first stages of the First Tiberium War as their main service rifle. Nod-aligned nations generally followed the case as the Brotherhood provided shipments of rifles for low price or even free of charge to loyal supporting regimes.
The GDI and GDI-aligned nations, however, decided to replace the older rifles like the M16 or the AK-47s with newer GAU-3 Eliminator rifles immediately prior and during the first stages of First Tiberium War.

The rifle was supposed to be the basic weapon of GDI and Nod minigunners in Renegade, however, for some reason, it was changed to the Cobretti AR-70. Oddly, these weapons are still featured in Ren's pre-rendered FMVs, usually in the hands of old Nod minigunners. An M203 version was also supposed to be available.