A magnet (from Greek μαγνητικός λίθος, "Magnesian stone") is a material or object that produces a magnetic field. This magnetic field is invisible but is responsible for the most notable property of a magnet: a force that pulls on other ferromagnetic materials and attracts or repels other magnets.

In this case, Magnetic Beam technology uses that magnetic field to affect movement of metal vehicles, fittingly made of ferromagnetic materials.

Use in Yuri's army[edit | edit source]

The Electromagnet is the main weapon of one of Yuri's unusual vehicles, the Magnetron EM Tank. It can rip enemy buildings and lift any ground vehicles or naval ships into the air to move them nearer. If the Magnetron is interrupted or stopped as ordered by the commander, the lifted vehicle will fall vertically into the ground - or water, if the target happens to be above water. It could deal massive damage if the victim was dropped on enemy structures, vehicles or unsuitable land, such as water.

Magnetically lifted vehicles are counted as air units and as such can be attacked by AA weapons.

Use in War of the Three Powers USSR[edit | edit source] 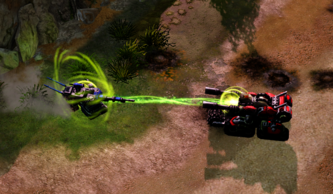 The "Schuka" Magnetic Harpoon in action

The Soviet's Magnetic Satellites shows the glory - and dementedness - of the Soviet Union in space technology. It pulls all hostile vehicles into space for later use with Orbital Drops. It can also drag Rocket Angels, Cryo Legionnaires, Tesla Troopers and Desolators to their deaths. It is powerful enough to drag even MCVs and battleships into orbit.

Another infamous use of magnetic beam technology were the Apocalypse Tanks' Schuka Magnetic Harpoon. Capable of drawing in enemy vehicles, causing them to be crushed by the Apocalypse's monstrous grinder. The M-Harpoon can prevent faster enemy units from escaping their destruction, and can also pull nearby ships from sea to land, shredding them in the process.

If the beam is used on structures, Assault Destroyers, King Onis or other Apocalypse Tanks, the Apocalypse using the beam will be dragged towards the enemy unit instead. It does not affect infantry units, not even ones wearing heavy armor, such as Tesla Troopers and Desolators. Also, the M-Harpoon and the 125mm Drakon Cannons cannot be used at the same time. Regardless, the Beam is a very powerful alternative to its Drakon Cannons.

The TS1 Tsarsky Leech Beam is a similar device equipped by the Hammer tank. It uses a modified magnetic beam to strip armor plating from an enemy vehicle, and allows the Hammer to steal the target's main weapon into its one-size-fits-all auxiliary weapons port.