Chief Animal Handler Petrokov stared out over the enormous concrete enclosure, squinting against the blinding white reflected in the morning sun. A few bears, trained Soviet war scouts and ferocious fighters, had begun to emerge from the cave recessed into the eastern wall of the miniature concrete city. Petrokov smiled as the largest, nicknamed "Borya," exited the hovel only to collapse several moments later once he'd found an appropriately sun-drenched spot of terrain. Petrokov liked these bears, more so in fact than most of his co-workers did, and certainly more than so any of the command staff responsible for disrupting his peaceful existence on a regular basis. Their latest choice would be the death of him, he thought, looking to the west where construction had begun in earnest on a new pen--much larger than the others and recessed deeply into the frozen ground. It was far from completion, as empty machinery and incomplete scaffolding stood shadowed and skeletal against the high walls of the deep pit, waiting to be brought to life. Petrokov shuddered involuntarily against the chill breeze. Mammoths. Why did it have to be mammoths? 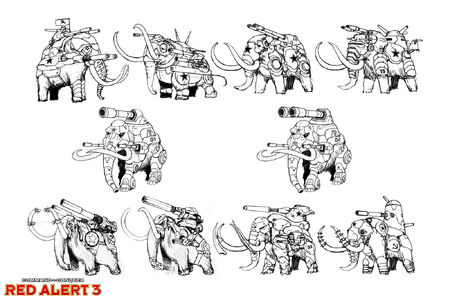 The mammoth tank is the latest and greatest weapon in the improvised-yet-highly-destructive Soviet arsenal. (Coming soon to Red Alert 3)

How Soviet High Command came into possession of such beasts, and why they suddenly had such a keen interest in weaponizing the enormous creatures, was beyond him. It defied all logic, but then, the war had long turned surreal for men like Petrokov, who never was the type to question authority. One thing was for certain, however: He was going to need bigger shovels.

As the temportal technology stabilized, envoys were sent from each major superpower to forge relations and set up beneficial alliances. Despite taking all possible precautionary measures, no commander could have foreseen that one temportal would be controlled from the other side by a malevolent force bent on the subjugation of all mankind. With that man firmly in control of the gateway and now stranded in prehistory, the beleaguered Allied and Soviet forces were forced to band together once more to survive the onslaught of prehistoric vermin sent to slaughter them. Having only brought a bare-bones cache of weapons remaining, and no fuel, Allied and Soviet engineers were forced to make do with any and all available resources.

Holed up in a makeshift base nestled against a tall mountainside, the engineers and commanders wrestled with the idea of gaining ground control in this hostile territory. With no roads to speak of, movement across the lush, green landscape would be nigh-impossible and they would be unable to refuel. Things looked grim for the trapped soldiers, when the solution to their problem came trampling through the jungle and into their small makeshift fort. The mammoth knocked over a high wall and shook its tusks to clear them of debris, snapping apart several Sickles as if they were children's toys. After killing a few brave conscripts and destroying an entire pallet of crates containing refurbished Terror Drones, the mammoth crashed to the ground as the overdose of tranquilizers (brought along in case of deviant bear behavior) kicked in. A holding pen, duplication center, outfitting quarters, and training facility were quickly erected, and the fight for the past had begun in earnest. 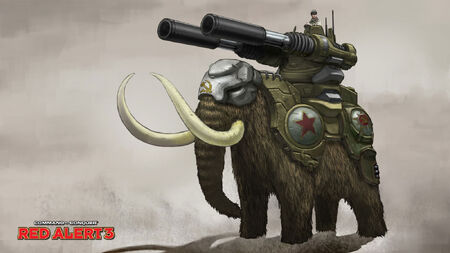 Mammoth tanks can naturally smell trouble coming from a click away, and require far less maintenance (though infinitely more shampooing) than conventional tanks.

The mammoth tank project is heralded by prehistorians as the first major step in reasserting control of the timeline. Two enormous Apocalypse cannons are mounted atop the mammoth's powerful girth, allowing for all-terrain movement combined with the heavy firepower the Soviets are known for. Powerful serrated tusks allow well-trained mammoths to deal with infantry and light vehicles in close range. And with their long trunks, the mammoths can wade into water, allowing assaulting forces to push out onto the sea and gain a short-range nautical foothold. Of course, the true power of the mammoth is evident only when the creature is running at full speed, becoming somewhat more difficult for the handler to control yet capable of knocking back or simply destroying nearly anything in its path. With an army of such behemoths leading the charge, the Soviet-Allied combine struck the first of many blows against the army of the past.

Battlefield reconnaissance has revealed at least these facts about the Mammoth Tank: