Maps are composed of hexagonal tiles. In game the length (longest diagonal) of a tile is 12 units. All maps are symmetrical, have the height of 7 tiles and width of 9 tiles in the edges. Available maximum width depends on the map.

Can be traversed and occupied by all unit types. 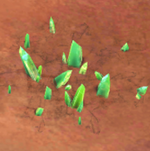 Each side of the map has four Tiberium patches. When harvested, it increases the Tiberium income and can be minded for a 100 seconds, after it is depleted, it changes to a flatland. Tiberium fields damage infantry units 5 HP per second.

Obstacles impede movement and firing options of ground vehicles and structures can't be built there. For aircraft obstacles are the same as flatland.

If the map has a lot of obstacles, it favors flying units.

Missile silo acts as a rock obstacle, except even aircraft can't fly over it. On the minimap it's designated as a missing tile in the middle of the map.

Pads are similar to the flatland, except structures can't be built on them. A single pad can span three or four tiles.

Base takes up 5 tiles and behaves like a tall structure — it can be targeted, but no unit can move through it.

Tile near the base where the new units appear. Spawn point is not visible in the minimap, but in game is indicated by a damaged flatland tile.

To view full map image, click on the minimap.