The Marked of Kane is a Cyborg cult within the Brotherhood of Nod.

They are the "Chosen" of Kane, existing alongside the Black Hand, and representing the ideas of Nod. Unlike Marcion's organization, the Marked are masters of covert and unconventional warfare, and utilize the state-of-the-art Tiberium-based technologies. The Marked were awakened in 2052 by LEGION. Controlled via cyber-neurological implant devices linked to central "control nodes" across the globe,[1] they obey their AI master without a shadow of doubt or remorse.

Typical for the Brotherhood, the subfaction's name appears to be a reference to the biblical Mark of Cain.

The Marked are a result of experiments authorized personally by Kane to create a completely loyal unit of cybernetically and Tiberium-enhanced soldiers, completely without pity or fear. According to intel files, Kane pondered the Brotherhood's defeat after the First Tiberium War for decades, studying the events of the war and why he lost. Eventually, the failure of the war was placed on emotion. While feelings of fear, empathy, anger, and camaraderie influenced people to join Nod, it could also give them reason to betray the Brotherhood. Realizing this, Kane set forth plans to create a truly dehumanized force.[2]

In underground labs in the Red Zones of Central Asia and Russia, the Marked were covertly researched. Researchers on the project were fanatics obsessed with Tiberium technology, using corpses of Nod soldiers in their terrifying experiments.[2] The project's existence was hidden from the Brotherhood, should it cause internal strife. Rumours of necromantic practices persisted, however, mostly due to the experiments carried out by Nod in relations to the Reaper project, where comatose mutants were transferred to research divisions for further experimentation.[3]

First reports of the Marked came from rumours of nomadic travelers and various Nod splinter colonies. Despite the remote location of the Marked labs, a few people managed to stumble upon the project, however, Nod followers dismissed these tales, while the Brotherhood's command officially denied the existence of any necromantic experiments.[4]

The Marked of Kane originally had been scheduled for completion near the end of the Second Tiberium War, yet due to GDI's victory and the insurrection of CABAL, the Marked remained deactivated until recently.[2]Due to humanity's troublesome experience with cybernetics in the past, many of the Brotherhood's own soldiers have expressed distrust and fear towards the Marked, despite the revenant army's absolute obedience and devotion to Kane.

Finally, in 2052, the Marked was awakened by LEGION, CABAL's successor, in order to reclaim the Tacitus.

Along with the Black Hand, the Marked of Kane appears to have been merged into the baseline Nod forces by the time of the Ascension Conflict. As evidenced by the presence of the Enlightened within the ranks of Nod's Defense Class. The pilot for the new generation of Cyborg Reapers are also stated to be drawn from the ranks of the Marked of Kane. 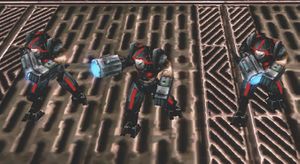 The Awakened Cyborg infantry serves as the core of the Marked.

As a result of their significant Tiberium enhancement, the basic robotic infantry of the Marked, the Awakened, are almost as strong as the elite infantry of GDI, with much more powerful Enlightened Cyborgs existing as support. Replacing the Black Hand troops in their role are Tiberium troopers, cybernetic warriors carrying a liquid Tiberium sprayer.

New upgrades include regenerating fields of magnetic mines that slowly damage vehicles unless repaired and cybernetic legs which drastically increase the speed of Marked infantry. Additionally, due to their Tiberium research, they use extremely powerful particle beam weaponry.

The Marked of Kane do not have access to Flame Tanks. However, they can construct Disruption towers at a much lower cost.

The Awakened: The core Marked of Kane infantry which come trained in small numbers for a high price, but are substantially more powerful than Militants and can defeat GDI rifle squads with ease - the Redemption ability, available to the core Nod faction, can even "awaken" dead Militants into these cyborgs. Also armed with EMP weapons that disable enemy forces.

The Enlightened: The premier Cyborg Infantry, the Enlightened fear nothing, designed to fight until death and to never give up Kane's will. The Enlightened fire Tiberium-charged particle beam that burn through nearly anything. They also carry a more potent version of the Awakened's EMP cannon.