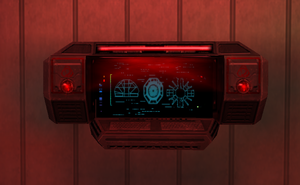 Master Control Terminals were an ingenious invention which entered widespread use in the First Tiberium War. While Nod and GDI were locked in mortal combat, both sides noticed that as the war dragged on, it became increasingly hard to staff bases with personnel, let alone maintain them. Facing these difficulties, technical R&D divisions of both sides started hasty development of a system that could not only monitor the status of a structure, but also run it without assistance. Soon a breakthrough was made, it came came in the form of the abandonment of an unwritten rule that technology exists to augment human abilities and adoption of a new one, that technology serves to eliminate need for human control and, by extension, human error.

The Master Control System was soon developed and introduced to the field . The system was not an AI, it was a highly sophisticated program, which monitored the structure's status and controled all of it's functions, even those as complex as Tiberium processing. The system also utillized various sensory and robotic repair facilities (and/or human a technician) to diagnose, plan and repair the building in an effective matter. The system's heart was a highly advanced and miniaturized mainframe, embedded in a sturdy frame of a console, which also served as the control terminal for the system. The consoles were usually located in highly secure locations within the buildings and more often than not protected by sophisticated weapon systems. Due to their appearance, they soon became known as Master Control Terminals.

The system performed its role flawlessly, and soon field commanders did not have to worry about maintenance staff, as only a small crew was required to keep structures in operational shape, compared to the large number of labor required in the pre-MCS days.

The system had one main flaw - the console's sturdy frame, while resistant to indirect damage, was very weak when it came to explosives and fire - C4 demolition charges could make short work of the control system and render the facility inoperable, as once the system was destroyed had to be completely replaced. Starting from the Second Tiberium War, EMP based weapons also possessed a danger, and could cause substantial damage. They could put the terminal, or the entire base, in a state of complete blackout. The MCS has been redesigned to automatically reboot if such a situation occurred.