McNeil was born in a Nod medical colony, after his parents were captured by the Brotherhood during the First Tiberium War. When Kane's scientists realized that the infant child has the perfect DNA structure for human enhancement with Tiberium, they took the child from the parents. When the McNeils resisted, they were shot dead by Nod troopers, leaving only his brother Jake alive.[1]

Nod scientists aimed to create a highly intelligent military commander with excellent strength and combat reflexes; in essence, the perfect soldier. However, the facility was liberated by Commander James Solomon's forces and the McNeil brothers were taken under GDI care. Michael spent his formative years in GDI bases and military academies, eventually, once old enough to join the GDI military, showing outstanding skills and abilities as a commando (thanks to Nod genetic enhancements that GDI is oblivious to). McNeil reached the rank of Commander in record time.[1]

He is a prominent field commander in his thirties, characterized as an intensely loyal and fiercely competitive individual in his periodical medical report #PSY89902. His friend and second in command, Lt Chandra, says that "Mack considers life simple. He knows what he wants and he'll do everything to achieve it. And like every good marine, he wants to win."[2]

Michael McNeil is, essentially, GDI's cleaner, called upon to handle the worst environmental crises and pacify the most violent of Nod uprisings. Stationed in Point Hope, Alaska, McNeil enjoys his work, but longs for something more, a purpose for his life. The re-emergence of Nod in September 2030 sees McNeil assigned command over GDI's North American forces, sent to handle the newest Nod outburst.[1]

On the eve of the war, the Commander McNeil was on maneuvers at the Southwest Training Center. Aboard the GDSS Philadelphia, General Solomon received the taunting message from Kane; the general ordered McNeil recalled immediately for GDI's reaction. Chandra personally delivered the recall order to McNeil in the field. The commander received a situation update upon returning to the Kodiak and dispatched to retake Phoenix Base from Nod General Vega.[3] This was followed by the destruction of the Nod base responsible for the attack.[4]

A Nod ship, based on Scrin technology, crashed in McNeil's operations area and was discovered by GDI reconnaissance. Solomon immediately grasped the importance of the find and diverted the commander to capture it.[5] McNeil led a team into the ship where he was ambushed by Umagon and other Forgotten who had arrived before them. After a brief stand-off, McNeil and Umagon struck a deal: GDI aided the Forgotten recover their leader, Tratos, from Nod captivity, and in return the Forgotten gave intelligence on Vega's main base in South America.[6] [7] 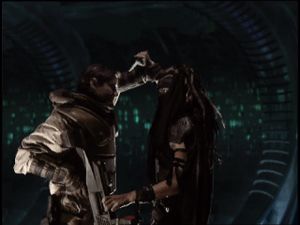 In the final stages of the assault on Vega's base, McNeil again took to the ground and personally fought his way into the step pyramid serving as Vega's command center. The commander found Vega but was unable to extract much information before the general expired from self-inflicted drug abuse. McNeil escaped before the base was destroyed by Nod nuclear weapons.[8] [9]

Shortly thereafter General Solomon ordered the commander to retake the recently-fallen Hammerfest and prevent Nod from escaping with GDI's sonic crystals, critical components of harmonic resonance technology. McNeil liberated the base but not in time to prevent Nod's theft of the crystals. The commander suffered a personal tragedy in the loss of his older brother, Jake McNeil. Jake, another GDI soldier, was at the base when it was overrun; Kane left a message goading the commander at his brother's death. Nonetheless McNeil went on to recapture the sonic crystals before they left the region.[9] [10]

As the war entered its final stages Nod began firing missiles at Europe aimed at spreading the rate of Tiberium growth. McNeil destroyed the missile factory and the prototype production facility for Nod's Banshee fighters.[11][12] [13] Battle finally came to the commander when Kodiak was grounded by an ion storm; the embattled command ship survived the assault launched on Kane's orders.[14] Having survived the assault, McNeil received intelligence on Kane's operations in Cairo from Ghostalker; the Forgotten commando had discovered the World Altering Missile and that Umagon was Kane's prisoner. The commander reacted to Umagon's plight by ordering an immediate assault on Cairo. He ignored General Solomon's demands to wait until less impulsive operation could be planned; the general feared the missile might launch if Nod felt cornered.[15]

GDI broke through Nod defenses and stormed Kane's Pyramid. McNeil personally confronted Kane before the Tacitus, however with Umagon being used as a human shield the commander was unable to get a clear shot. Umagon broke free as the structure shook violently and McNeil physically launched himself at the enemy. The GDI soldier shot the Nod messiah multiple times but Kane emerged unfazed; the Nod leader did not immediately realize he had been shot and believed himself victorious. McNeil used this short period of misunderstanding to impale Kane on a spear-like piece of debris. The GDI commander escaped with Umagon and the Tacitus.[15]

McNeil was confident he had killed Kane.

Aboard the Kodiak, Umagon volunteered to test the new anti-Tiberium antigen. Unfortunately, the antigen failed and Umagon was mutated even further. Despite winning the Second Tiberium War, McNeil held no illusions about the future and grasped the implications of global Tiberium poisoning. Like others, he hoped the newly recovered Tacitus would hold the answer to fighting Tiberium.[16] 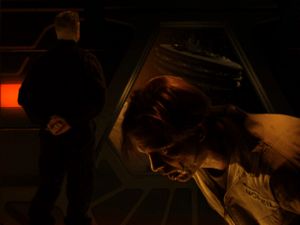 GDI leaked information about their work on Tiberium reduction technology. Kane sent Nod Commander Anton Slavik to destroy the research facility and ensure that no such technology would exist to counter the Brotherhood's plans. The entire operation was a trap laid by GDI; Slavik and Oxanna Kristos were captured and brought before McNeil before being shipped to a maximum security prison near Hammerfest. McNeil gloated at Slavik's defeat and from then on the Nod commander held a grudge against his GDI counterpart.[17]

Slavik had his opportunity for revenge. He did not hesitate to convince Jake McNeil, McNeil's brother, to defect to Nod and help the Brotherhood capture Hammerfest. Eventually, McNeil himself was captured and brought before Slavik. The Nod commander showed a defeated and battered McNeil the destruction of the GDSS Philadelphia.[18]

McNeil's career continued. By the Third Tiberium War he was the Battle Commander of the 22nd Infantry Division from the Orca Command unit Huron. He participated in missions in San Diego, Portugal and Australia. McNeil's superior was General Jack Granger. 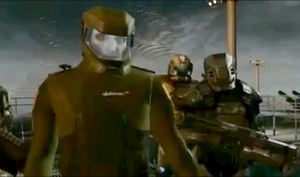 After the Third Tiberium War, McNeil recruited Nod priestess Maja as a double agent for GDI, and worked with Ricardo Vega and Tera Gallagher. He greets Ricardo Vega on top of Mobius Research Station, accompanied by Tera Gallagher and a retinue of GDI riflemen and commandos.

By the time of the Incursion War, GDI High Command developed a new capital ship codenamed the Kodiak to counter future Scrin incursions. In honor of McNeil's legendary services to GDI, one of the Kodiaks was named 'GDIS Michael McNeil'.

Westwood originally intended for McNeil to die in with the rest of the Kodiak's command crew during the crash at the beginning of Command & Conquer: Tiberian Sun: Firestorm; this was because the developers developed a dislike with working with the characters. When creative control of Command & Conquer passed from Westwood, Electronic Arts had McNeil not being present on the ship during its final flight and he subsequently appeared in the tie-in novel, Tiberium Wars.

The elderly Michael McNeil's model was created by Chance Rowe.