After the spectacular explosion of the prototype KA-3 Tesla plane killed both Krasna Aerospace's lead aircraft designer and test pilot, the state of Soviet fighter design was in shambles. Krasna was in disarray, and industry analysts predicted that the Soviet Union would not be able to field a credible air superiority fighter for at least a decade. They could not have foreseen that two young visionary designers, Mikevich and Gurevoyan, would join forces to create one of the most successful air superiority fighters in the world.

The MiG fighter is in every way a revolutionary design. Its main weapon system is as dependable and successful as any in the world, able to accurately track and destroy enemy aircraft even when confronted with the most advanced in electronic aerial countermeasures. The MiG's burst-missiles earn their "Matryosha" nickname from the Russian dolls-within-dolls, due to the missiles' multiple sub-warheads that cause explosive damage inside their targets. This makes the MiG well suited to both intercepting enemy air threats and escorting Soviet bombers and ground attack aircraft.

Before Allied Air Command could begin to rest on its laurels after a string of victories, the Soviet Union redoubled its efforts to reclaim the skies with its powerful and sleek MiG fighter.

Designed from the ground up as an air superiority fighter, the MiG fighter has no air-to-ground capability, making it vulnerable to anti-air fire. However, when faced with such threats, MiG pilots are taught to recall the age-old Soviet tale of the Bear and the Dog: While the Dog barks at the oncoming snowstorm in earnest, the Bear retreats to the warmth of the cave to strike another day. Like the Bear, a talented MiG pilot will take advantage of the speed and agility of the aircraft to vacate the airspace before the storm arrives.

It is also the first Soviet production fighter aircraft to have full VTOL capability, allowing it to deploy at forward airbases near the front lines. In normal flight, a sleek aerodynamic design gives the MiG excellent speed and maneuverability. However, due to a lack of precision-machined parts, the mechanism for transitioning between vertical and horizontal flight is somewhat unwieldy. Many flight students find themselves unable to execute the transition, to both their chagrin and that of their flight instructors who must then recover control of the aircraft. Those talented few who master the transition find air combat maneuvering to be relatively straightforward. 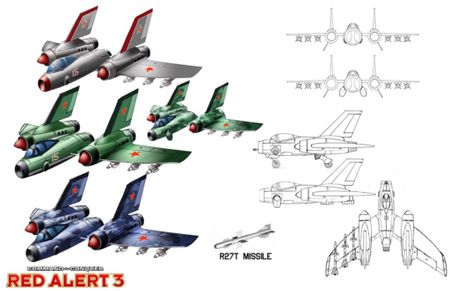 A practical VTOL design and top-of-the-line self-guided ordnance makes the MiG deadly to enemy aircraft, even those capable of returning fire.

In spite of the difficulties and dangers of flying the MiG fighter, current Soviet National Air Combat Division rosters are full to capacity, the result of an unexpected flood of volunteers signing up for the strenuous flight training required to fly this demanding aircraft. This is partly due to an intensive propaganda campaign, but the image of a daring fighter pilot defending the Soviet Union also seems to resonate with the Russian spirit. Even expatriate filmmaker Boris Denisov's documentary The Empty Chair, which castigated the Soviet military for mismanagement and incompetency, painted a powerful portrait of a MiG fighter pilot, a selfless heroine for the people, darting between enemy aircraft and, at times, even drawing fire upon her own aircraft in order to protect the crew of a besieged Kirov Airship. His final work, The Empty Chair won Denisov a significant level of posthumous acclaim.

The aura of prestige shared by cadets in the Air Combat Division has thoroughly permeated civilian life, allowing the Soviet military to begin recruiting candidates straight from elementary school. Political officers scour schools for boys and girls with just the right balance of daring, aggression, and patriotism--qualities that are then honed for years at the Soviet Military Affairs Bureau. Even with the rigorous selection process, less than half of the candidates will graduate; all will find a career in military services in one form or another, however.

Battlefield reconnaissance has revealed at least these facts about the MiG Fighter: