MidEast Crisis 2 is a total conversion mod for Command & Conquer 3: Tiberium Wars and is the sequel to MidEast Crisis.

The mod focuses on the events after MidEast Crisis, in which a massive nuclear disaster in Syria led to widespread unrest and instability in the Middle East and the formation of the Guardians of Islam (GOI), comprised of many Islamic countries in an attempt to bring about peace.

However, worldwide events, including the collapse of the American economy and the near collapse and reconstruction of the United Nations into a more militaristic organization leads to the Middle East suffering another crisis. The tension finally boils over when the United Nations, now under the ruthless control of corporate conglomerates such as Maginoil, deploys its military forces into the Middle East under the pretense of a peacekeeping mission to drain its resources.

This causes the Israeli Defense Force (IDF) and the GOI to clash over territories, resources and political influence in the region so that the victor can become the dominant middle eastern powerhouse and resist the UN once their enemies are eliminated.

MidEast Crisis 2's gameplay focuses on occupation warfare within cities using; money (from occupation taxes), gas (from oil derricks and gas stations) and special weapons (from ammo crates) as well as the tactical composition of armies. 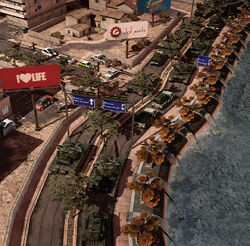 Following the nuclear disaster that decimated Syria at the end of the first Syrian-Israeli war, a pan-Islamic humanitarian organization was formed to provide aid to the survivors. Following its successes in Syria, this organization was soon renamed the Guardians of Islam and became a progressive force for improvement across the region. Though religiously motivated, the movement is secularly led by popularly elected intellectual elites, and has been active in promoting support for education, construction of new infrastructure and more. One of its most notable projects was the construction of transmitter towers to provide free high-speed wireless internet, which helped to turn the region into a digital powerhouse. One of the biggest questions it faces during the current election cycle is whether or not to adopt control of a combined military force, much like the United Nations, in the event of another crisis. Many insist that the Guardians must remain a peaceful organization, but others see it as an unparalleled opportunity to become a major world power and to free the Islamic world from Western meddling once and for all.

The GOI is currently in the middle of democratic elections and as such players can choose to select one of the two parties for special bonus units and support powers.

The GOI uses many Russian vehicles with a mix of Islamic influence and computer-based upgrades thrown in. Players can call upon the infamous Russian T90 tank, the Katyusha rocket battery or the Mi-24 Hind gunship to the battlefield along with light infantry and clever computer viruses.Its main strength is ground combat.

Israel won the first Syrian-Israeli War at a bitter price in terms of life and international respect. The nuclear disaster that irradiated much of Syria has never been formally linked to IDF interference, but circumstantial evidence has raised many eyebrows. This, combined with the decline of the Western superpowers, particularly the United States, has left Israel politically and militarily isolated, while surrounded by the progressive and confident Guardians of Islam. Recently, a strong Zionist movement has been countering the political influence of the GOI. As internal terrorism reached an all-time high in the wake of the first MidEast Crisis, Israel adopted martial law. Today, terrorism has been virtually eliminated and martial law repealed, but an almost-unchallenged police state remains. The IDF has adopted fully air-mobile tactics to provide for an elastic defense strategy and has recently promised to employ tactical nuclear power in the event of a major war, leading the vast majority of Israelis to have loyal confidence in their military.

The IDF has gone under several new weapon, infantry training, tactical air support and vehicle improvement programs since the last war that ravaged the land.

Its basic infantry are highly trained infantry-killing Sayeret commandos and tank-hunting Reservists, both of which are highly effective in their roles. Their vehicles are all about survivability, which is the whole aim in the infamous Merkava Tank and Sanctuary APC. Both can be upgraded with a Trophy countermeasure system, giving a significant defense against tank and missile fire. The IDF also has highly useful utility drones which can be used to repair, kill infantry or report the daily news directly to your TV.

The tactical air arm of the IDF comes in the form of massive airships and attack helicopters which can dominate both the ground and air theaters. The AWACS surveillance airship is able to reveal large areas of the map and report enemy movements to the Gideon attack helicopter and massive, drone-carrying Ark airship.

Of note is that during the GOI/IDF war Israel withdrew its participation in the Geneva convention several times therefore allowing them to field some of their more questionable (and illegal) weapons for use in desperate situations. Appropriately named Desperate Measures allow certain units to attain more firepower such as the Repair Drone overcharging its welder to cut through tank armour, or the Sling Drone using a hugely inhumane microwave gun which literally cooks infantry. But perhaps the most controversial of these measures is that when enabled, tactical nuclear weapons are available for use in the F15 Eagle's and the Gehenna rocket launcher's ICBM warhead. 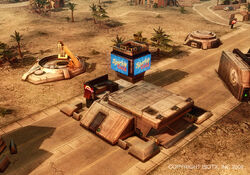 Sponsor-controlled UN as seen by the advertising of Sparkle Cola

Buoyed by equipment and political support from the EU and NATO, extensive recruitment of Private Military Companies and corporate sponsorship. The UN Peacekeepers operates with a mandate and modus operandi that barely resembles the organization that stood idle as the Syria-Israel war unfolded and only intervened after the "reactor disaster" disfigured huge portions of Syria beyond recognition. The UN Peacekeepers are authorized and equipped to take any necessary measures to prevent a repeat of the previous MidEast conflict, not limited to directly attacking both the IDF and GOI.

The United Nations favour quality over quantity, and power over speed. For every one Peacekeeper there are almost four times as many other combatants in a zone. That said, that one Peacekeeper is fully capable to handle those combatants. The UN forces generally overpower their enemies, being about twice as powerful as the other faction's equivalent. For example, it takes two T90s to match one M1A3 Abrams. This, however comes with a heavy price tag. This is seen again where one M1A3 costs well near two T-90's. Funding from this comes from major corporate backing that drive the UN juggernaut across the Middle East.

The entire UN strategy is area denial and establishing total dominance over the battle zone. Defense Contractors can be seen constructing small outposts far from the central UN base, creating choke points for any IDF or GOI forces locked in battle with them. UN forward operating bases themselves often have small VTOL airfields deployed so fighters are directly supplied from the front line.

Veterans of battles with the UN have learned that they also favour firepower as well. With Abrams tanks unleashing heavy fire on enemy tanks while Comanches raining hell down upon them, few who run into a firefight with a well supplied UN force come out alive. Even the Peacekeepers themselves are armed like this, trading in assault rifles for Milkor RGL40 Grenade Launchers that can easily take out a tank if needed. Despite all these advantages, the UN still has one more weapon that has dominated the Middle East; a giant monster of a tank known as the Brummbar, which dwarfs all other known tanks on the battlefield. This dominating machine can take on infantry, vehicles, and aircraft, and has been known to destroy two Merkeva's in one shot. While normally only one is fielded at a time due to international laws, when said laws are broken by IDF or GOI combatants, the UN can deem it necessary to deploy more to a maximum of four if needed. This was seen in the UN's takeover of Jerusalem.