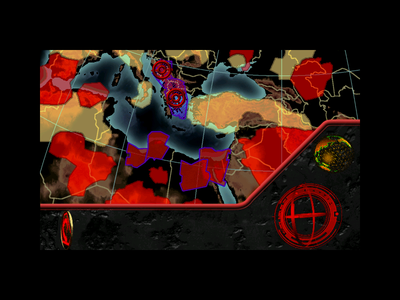 Nod (Red) and GDI (yellow) military zones in Europe and the Middle East at the beginning of the 2nd Tiberium War.

Unlike in the First Tiberium War where the GDI and Nod forces fought directly for control of specific nations and in many cases invaded neutral ones, in the Second Tiberium War the forces were instead understood as controlling and fighting over geographical regions, usually without much regard for national borders.

This situation likely resulted from a number of causes.

Military zones were the focus of conflict between the factions.  The central cross-hairs within the high-lighted zones apparantly does not appear to always represent the actual location of the mission, for instance the Cairo missions cross-hairs both centre on a location the Sinai desert not Cairo.  Most probably the cross-hairs actually represents the central base in command of the zone being contested, this was in both cases located in the Sinai desert because it is a large zone covering several all or part of several middle-eastern countries in addition to Egypt.  It is not always the case that the central base is actually the base of importance to the mission but it can be assumed to be for provisional purposes if there is no other evidence to go on.

The areas not controlled by either side, the neutral areas are somewhat mysterious in their nature.  They can surmised to represent territories that are in the following state.

Due to the above mentioned nature of the war it is not possible to determine national allegiances for classification purposes in the same manner.  However they can be classified according to the following system if (as far as is known) the following applies.

Disputed is a new classification invented to represent the situation where while both sides have established control over areas of a nations territory, but the central government represented by the capital has not been 'secured' by either side.  The same classification could be used for other games than Tiberium Sun if relevant, but remember that it does not mean the same thing as neutral.