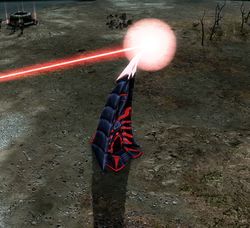 The Obelisk of Light was one of the application of LASER technology for war, seen since the First Tiberium War

A LASER (Light Amplified by Stimulated Emission of Radiation) is a coherent beam of light radiation. Light of a specific wavelength is amplified and "bounces" off a series of mirrors inside the laser through a "gain medium", until a portion of the light is passed through the laser and is directed as a beam outward. Lasers have been used to store optical data (such as that on a CD), and is the basic contravance for Holovision sets and communications.

Nod has used lasers for another purpose; weaponry. Since the First Tiberium War, Nod has fielded laser technology as an extremely dangerous directed energy weapon.

The Nod mainstay Obelisk of Light was an extremely powerful laser emitter. The destructive potential of the Obelisk was, at the time, unparalleled, though it required massive amounts of power. Smaller, man portable laser weaponry, such as the Firefly rifle and Tarantula chaingun were simply lower-powered infantry-scale versions of the same weaponry. Also, first prototypical laser fences were deployed in high profile bases of the Brotherhood.

Nod continued to deploy its Obelisk of Light as an extremely effective base defense. Also, Nod developed smaller laser turret defenses for lighter opponents in groups, which were not as power hungry as the Obelisks. For defense, the laser fence became a standard feature of many Nod bases, supplanting normal concrete walls.

CABAL actually improved upon Nod lasers, creating the CABAL Obelisk, with a faster rate of fire than standard Obelisks and the Obelisk of Darkness, which would vaporize aircraft. He also mounted extremely powerful lasers on his Core Defender. Fortunately for the GDI and Nod coalition that opposed CABAL, the Core Defender's lasers were unable to target aircraft. 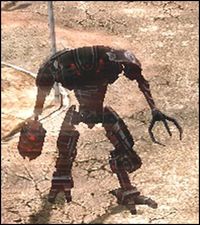 The Nod Avatar is equipped with a powerful LASER weapon

The Obelisk and Laser turrets both received substantial upgrades. The Obelisk was now capable of sweeping its beam to eradicate infantry, and the laser turrets were now double barrelled and part of Nod's Hub defense system, though both laser systems still lacked anti-aircraft ability. The first mobile lasers were carried upon the Purifier Warmech, and the technology was advanced and applied to the more advanced Avatar Warmech. Additionally Scorpion tanks, raider buggies, and Venom craft could receive Spitfire laser capacitors to boost their firepower, though neither the Black Hand or Marked of Kane chose to utilize the capacitors, replacing them with charged particle beam and supercharged particle beam. Nod commandos also carry portable laser weapons, and a small power source for them on their backs. The Redeemer has a triple-barrelled laser cannon (based on Obelisk technology) as basic armament. 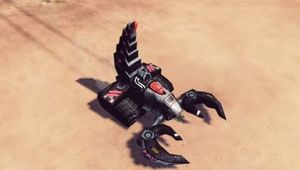 The Scorpion tank is now armed with an anti-crawler laser

As the Tiberium Control Network was partially completed this allowed GDI to reintroduce some of its forgotten weaponry. One of these was the AW-T2 Titan. It was initially planned to be equipped with a arm cannon but GDI engineers figured that the walker had enough weight to incorporate a laser capacitor. Thus GDI fielded its first unit with a laser weapon. The Titan can also be upgraded with a second laser arm when given a blue Tiberium core, making it the perfect 'Crawler killer'. Thunderheads are armed with an anti heavy lasers as well.

Nod's latest version of the Obelisk of Light are now a combination of anti-Air and Anti-surface laser base defenses, The Scorpion Tank and the Cyborg Commando also wield powerful laser weapons but the latest version of the Avatar traded its laser for a cannon. Also Spider tanks can make the Widow's laser stronger and the Basilisks are armed with anti air lasers for heavy air units like Kodiaks.