Mind control is exercising influence over the will of another; in effect turning an enemy unit into a puppet of your forces. While this ability is associated with psychic powers (which was until recently was considered fanciful), mental conditioning or chemicals can also subvert units.

In the Command & Conquer series, mind control abilities appeared in the Tiberium and Red Alert universes.

The Scrin Mastermind could assert control over most units and structures

The Brotherhood of Nod excelled in eluding their enemies, extracting information and persuading the masses. However, it was not until the Second Tiberium War that they would develop weaponry that would, at least temporarily, directly submit enemies to their will. Their toxin soldiers fired darts with psychotropic agents, which were used upon civilians to lure Tiberium lifeforms from the so-called genesis pit to a Global Defense Initiative base to destroy it.

In the non-canon timeline, toxin soldiers used these weapons to capture Jake McNeil and bring him to Oxanna Kristos for interrogation.

By the time of the Third Tiberium War, the Scrin were able to completely and permanently control the minds of their targets. Their special commandos, dubbed Masterminds, could control a single unit or structure and retreat to a safe distance. The Traveler-59 sect perfected this ability, with their mutated human cultists able to do the same, and prodigies also possessing the ability to control multiple targets in a small area for a short duration of time.

The Brotherhood of Nod still resorted to temporary measures, such as hallucinogenic grenades thrown by confessors and the rage generator attached to Redeemers, which caused enemy forces to temporarily see their comrades as enemies and fire upon them.

No mind control abilities were seen during the Ascension Conflict. 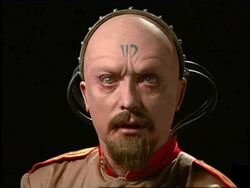 Under the rule of Joseph Stalin, the Psychic Corps was formed. This secret branch of the Soviet armed forces was led by the man known only as Yuri, who developed mind control technologies such as the headpieces used by himself and Psi-Corps troopers, and mass control devices like the psychic beacon, psychic amplifier and psychic dominator. After the Soviet Union was defeated in the first iteration of the Third World War, Yuri used his own secret army to control the world. In the second iteration of the war caused by time travel, his plans were exposed and he was forced to fight on his own earlier than expected. Still, almost all the mind control technologies he had previously designed were available to him. Despite this, he was defeated, with the Allies placing him in a unique chamber which blocked his personal mind control powers, guarded by soldiers with headpieces presumably protecting them from this as well.

When the timeline was altered again, mind control abilities were not seen in major conflicts. However, the Japanese supersoldier program gave its subjects immense psionic powers, including mind control. Yuriko Omega made use of this power in her escape from the Shiro Sanitarium. Despite this, she was given a psychic dampener which, among else, prevented her from controlling minds.