Arguably the most powerful weapon in the Allied arsenal, the Mirage Tank combines great firepower with a high-tech camouflaging system--the perfect combination for ambushing Soviet armor divisions attempting to cross international borders without permit. Although this vehicle is based on a French tank chassis and original weapon design, it was military research firm FutureTech Corporation that honed its distinguishing features and managed to mold them together in a successful, cost-effective way. An ongoing partnership with the Allies soon led to the Mirage Tank's mass production, in spite of the Soviet Union's bitter protests and threats of wide-scale retaliation. 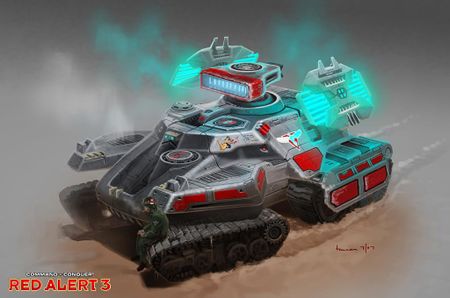 The Mirage Tank is the Allies' finest armor-killer, and continues to baffle, frustrate, and some say even frighten Soviet forces continually encroaching on Allied territories.

The name of the Mirage Tank is in reference to the effect caused by its on-board reactive camoscanner technology, which envelops the vehicle in a special camouflage field. To the naked eye, this makes the normally-muscular Mirage Tank resemble something common and mundane to its surroundings, be it a tree or a milk truck, or even a smaller object such as a lamp post. Even when under the scrutiny of a sophisticated scanning array, this makes the Mirage Tank altogether invisible. Consequently, the camoscanners enable Mirage Tank operators to blend into their environment, to elude enemy forces or stage an ambush... provided that they remain motionless and do not fire the main gun. These limitations are necessary to reduce heat signatures and conserve energy, as otherwise, enemy forces would be able to pick up the disguised Mirage Tank on short-range scan. The number of times camouflaged Mirage Tanks have successfully routed Soviet armor divisions continues to climb, to that point at which it no longer seems possible to keep accurate count of their successes (in part because Soviet ministers have now taken to blaming any accidents resulting in the destruction of their forces on Mirage Tank ambushes). 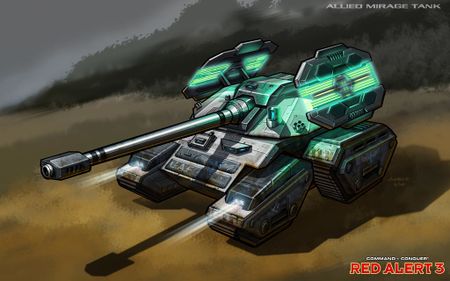 Above: A Mirage Tank prototype before it gained its spectrum cannon. The number of Mirage Tanks currently in active duty is a highly classified secret. The outspoken Soviet minister of defense has claimed that these vehicles seem to be so numerous that "[T]hey outnumber the hairs on [his] arms."

The camoprojectors would be of limited value if not for the Mirage Tank's main weapon, the spectrum dispersion cannon. Essentially a weaponized version of L.A.S.E.R. technology, the spectrum cannon focuses and amplifies light waves to form an extremely destructive (though short-ranged) burst of high-energy photons, which can cut through any known substance easily. What's more, the spectrum cannon's energy disperses from its targets, reflecting onto nearby forces, and making it still easier for just a small group of Mirage Tanks to counter armored divisions many times their number. Apart from its limited range, the spectrum cannon's only other limitation is that it must be firmly mounted into the chassis of the Mirage Tank. Fortunately, Mirage Tanks are maneuverable enough to be able to quickly turn to face most armored forces.

As if all this weren't sufficient, Mirage Tanks possess one other remarkable trick in the gap generator device, used to invert the camoprojector field onto nearby Allied forces bearing the appropriate transmitters. While Mirage Tanks cannot disguise themselves or use their weapon while the gap generator is active, they are able to conceal small armies in this fashion, causing enemy forces to grossly underestimate their numbers.

The sophisticated systems on the Mirage Tank demand years of training to master, and the tank sacrifices heavy armor for its mobility and camouflaging features--but these can hardly be considered weaknesses.

Battlefield reconnaissance has revealed at least these facts about the Mirage Tank: