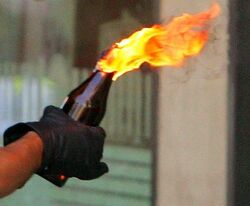 Molotov Cocktails are generic names for a range of improvised incendiary weapons used by followed units:

In its simplest form, a Molotov cocktail is a glass bottle filled with flammable liquid (such as petrol) with a source of ignition. In action, the fuse is lit and the bottle thrown towards a target. When the bottle smashed on impact, the liquid ignites, creating a fireball, burning everything in the blast.

These makeshift grenades are very easy to make and during War of the Three Powers they were widely used by soviet conscripts. The conscript can switch from using ADK-45 Assault Rifles to the Molotov in order to deal more effectively with tougher targets, such as Riot shielded peacekeepers, vehicles and structures. Molotovs can also be hurled at enemy garrisoned structures, clearing it out in the ensuing blaze. They are not accurate against faster units that can evade the Molotovs thrown at them.

The Molotov cocktail is also a favorite weapon of the poorly-armed militias which made up of a typical GLA Angry Mob, especially female members.