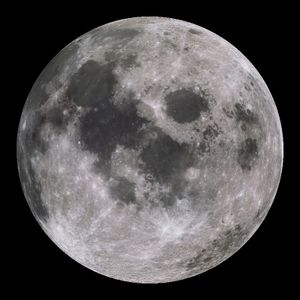 A moon is a type of naturally-occurring satellite that's within orbit of a planetary body where the barycenter is still within the larger body. Earth itself has only one such satellite, Luna, which is typically, in English, simply called "the Moon".

Luna is far smaller than Earth (though it is the 5th largest moon in the Solar system, but large in comparison to its parent planet), and therefore, possesses lower gravity. This means that the Moon lacks an atmosphere, making it uninhabitable, without a contained air supply.

Prior to World War 3, the Moon was the goal of both the Allies and the Soviets in the Space Race, which is a literal race against time and competition. July 20, 1969 is the date Allied America, with its Apollo 11 mission, had beaten the Soviets to the Moon. As Neil Armstrong, the first to walk on Luna, once said: "That's one small step for man, one giant leap for Mankind."

Little did the world knew Yuri and the Soviets would also make giant leaps of their own on the Moon.

Within the Red Alert storyline, the Moon is depicted as possessing a very hostile environment (in keeping with its real-life status). There is no air on the Moon, so most infantry units cannot function there - only retrofitted vehicles, or infantry equipped with hazard suits (converted Tesla Trooper armor and Desolators). A special Cosmonaut version of the Rocketeer, armed with LASER weaponry, is developed by the Soviets for lunar combat operations. Still, this means it is impossible to use Engineers on the Moon to capture enemy bases (or to capture them then sell them for resources). The worst aspect of the Moon, however, is that there are absolutely no resources. There is no ore (much less gems) or oil derricks. The only credits you get is what you bring with you, which will soon run out. The only reason for going to the Moon is that, due to its extreme isolation from Earth, bases there are ostensibly free from observation/attack from Earth.

Role in the War[edit | edit source]

During the Psychic Dominator Disaster, Yuri had a base established on the Moon. A Soviet Commander had hijacked one of Yuri's spacecraft, becoming his nation's first Cosmonaut to reach Luna. Soon after the landing, Operation: "To the Moon" commenced, and a battle raged on the moon, its outcome affecting the future of the "Space Race". Using certain vehicles and infantry with airtight breathing apparatus, the Commander destroyed Yuri's moon base. The Commander's base presumably remained as a Soviet lunar colony after the war.

How this event influenced Soviet space exploration remains to be seen.