Moscow (Russian: Москва́, romanised: Moskvá) is the capital and the largest city of the Soviet Union and it's main republic. It is also the largest city in Europe, with the Moscow metropolitan area ranking among the largest urban areas in the world. The city is named after the river (old Russian: гра́д Моско́в, roman. grad Moskov literally "the city by the Moskva River").

Moscow is the country's political, economic, religious, financial, educational and transportation centre. It is located on the Moskva River in the Central Federal District, in the European part of Russia. Historically, it was the capital of the Grand Duchy of Moscow and, for a time, the Tsardom of Russia. It is the site of the Moscow Kremlin, a medieval fort complex which serves as the residence of the Soviet Premier and the centre of the Soviet Government. The centre was in the old Kremlin palace structure before, however after time traveling and caused alterations there was built a new modern skyscraper nearby for it. Moscow is a major economic centre and is home to many scientific and educational institutions, as well as numerous sport facilities. It possesses a complex transport system, that includes one of the world’s busiest metro systems which is famous for its architecture and artwork.

This city has a long history of conflicts and treachery. The first reference to Moscow dates from 1147. Moscow developed into a stable and prosperous principality, known as Grand Duchy of Moscow, for many years and attracted a large number of refugees from across Russia. In 1380, prince Dmitry Donskoy of Moscow led a united Russian army to an important victory over the Tatars in the Battle of Kulikovo. The battle, however, was not decisive and only two years later Moscow was sacked by khan Tokhtamysh. Ivan III, in 1480, finally broke the Russian people free from Tatar control, allowing Moscow to become the center of power in Russia. In 1571, the Crimean Tatars attacked and sacked Moscow, burning everything but the Kremlin. In 1609, the Swedish army led by Count Jacob De la Gardie and Evert Horn started their march from Great Novgorod toward Moscow to help Tsar Vasili Shuiski, entered Moscow in 1610 and suppressed the rebellion against the Tsar, but left it early in 1611, following which the Polish–Lithuanian army invaded. During the Polish–Muscovite War (1605–1618) hetman Stanisław Żółkiewski entered Moscow after defeating the Russians in the Battle of Klushino.

The 17th century was rich in popular risings, such as the liberation of Moscow from the Polish–Lithuanian invaders (1612), the Salt Riot (1648), the Copper Riot (1662), and the Moscow Uprising of 1682. The plague epidemics ravaged Moscow in 1570–1571, 1592 and 1654–1656. The city ceased to be Russia’s capital in 1712. During the French invasion of Russia in 1812, the Muscovites burned the city and evacuated, as Napoleon’s forces were approaching on 14 September. Napoleon’s Grande Armée, plagued by hunger, cold and poor supply lines, was forced to retreat and was nearly annihilated by the devastating Russian winter and sporadic attacks by Russian military forces. As many as 400,000 died in during this time and only a few tens of thousands of ravaged troops returned. Following the Russian Revolution of 1917, on 12 March 1918 Moscow became the capital of the Russian Soviet Federative Socialist Republic and of the Soviet Union less than five years later.

With the Soviet forces confined to the city and its surrounding areas in the final stages of the war, the Allies launched a final assault to destroy the Soviet military and capture Stalin, but his body was found later in a collapsed bunker.

After Second World War, Moscow remained the capital of the new USSR under Alexander Romanov. At the end of Third World War it was invaded by the Allies during Operation Chrono Storm.

During the War from the Soviet perspective, Soviet units loyal to a famous Commander revolted against Premier Yuri and destroyed the Kremlin (Operation Red Revolution).

With Allies once again on the doorsteps of the city, mass panic swept among the Soviet civilians. Premier Romanov fled from the advancing Allies but Cherdenko's erasure of Professor Einstein resulted in a new timeline where Moscow was safe from the Allies and Cherdenko himself became Premier.

President Ackerman attempts to attack Moscow and level it with some sort of laser weapon built on Mt. Rushmore. However, this was halted by an Allied intervention. 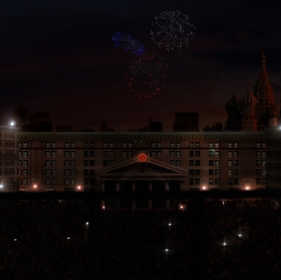 In the Soviet Campaign Cherdenko briefs the commander from his office in Moscow. It is also where Cherdenko staged his assassination attempt on himself to frame General Krukov. When Cherdenko himself is killed on Easter Island after betraying the Commander, the latter returns to Moscow after destroying and then rebuilding the Statue of Liberty with Lenin's statue. Dasha tells the him that the people want to meet their new Premier - the Commander will later come out on Kremlin palace balcony and is glorified by crowd of Russian people and magnificent fireworks.

In the Imperial Campaign several VIP Bunkers were captured by the Imperial forces so the Imperials could gain access to the Soviet military equipment before the Shogun Executioner levelled the city. Then they destroyed most of Moscow along with the Kremlin skyscraper. The time machine was also destroyed when it was airlifted out of the Kremlin.