Created by the Australian-based Towne-Travers Technologies, the Multigunner infantry fighting vehicle was a combat support vehicle known for its speed and versatility.

The IFV is able to carry one co-pilot at a time, and its multiturret system makes use of the co-pilot's special-weapons training and equipment in an augmented or modified way, while safely preventing untrained users from accessing any unauthorized configurations. This allows the IFV to respond to be quickly customized to react to any threats they encounter. Even with no co-pilot aboard, IFVs often provide excellent anti-air support for heavy armor via their light missile launchers.

Even though Multigunner IFVs are organized into their own units, in practice they are constantly assigned to support other combat teams. On average, a Multigunner IFV can expect to spend 80 percent of its service life away from its home unit. Because of this, IFV drivers are known for having an intuitive knack for quickly building rapport with other soldiers.

The Multigunner IFV is the principal troop-carrying vehicle of the Allied ground forces and at the same time, its main anti-aircraft vehicle. Its design resembles an up-armoured dune buggy with rocket launchers on top. Its default weapon is the Multipurpose Missile Launcher, which fires rockets effective against aircraft and light vehicles, but deals only light damage against armored units. Thus, the IFV should not be used directly as an anti-tank weapon (unless carrying an anti-armor infantry). The IFV has very light armour but very high speed. The Multigunner IFV can only carry one passenger at a time, and loses its anti-aircraft capability if the passenger doesn't have an anti-air weapon, due to fact that the turret automatically adapts to the armament the infantry is carrying. It should be noted that its default rocket launcher features a high rate of fire, which makes up somewhat for the light damage of the rockets. 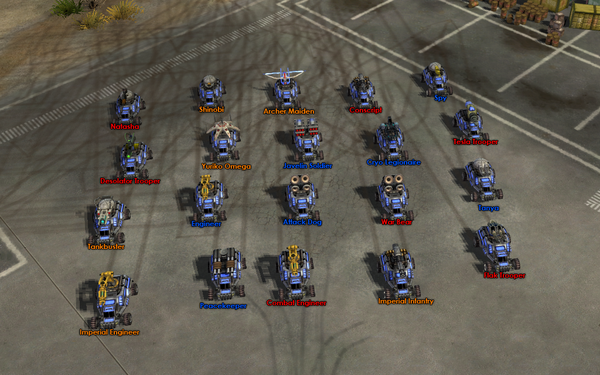 All the different versions of the Multigunner IFV, based on the infantry unit garrisoned inside it.