The Empire of the Rising Sun attacked from the seas using its never-before-seen army, assembled in secret. And the Empire met with little resistance overtaking much of the waters north of the Soviet Union, in part because the element of surprise was on the Emperor's side, and in part because of Imperial naginata cruisers. The mainline ship-hunters of the Imperial navy decimated virtually all that stood in their way, opening up an opportunity for Japan's shogun battleships to lay down withering coastal bombardment to pave the way for a full-scale invasion. While the naginata's role is limited to blockading the seas, it excels in this to such an extent that it has proved itself as one of Japan's most-feared fighting elements.

The role of the naginata cruiser is exemplified even in its title: These ships take their name from an ancient Japanese bladed staff, once used to keep the enemy at bay or to bring down fast-moving cavalry. Today's naginata likewise is dangerously unapproachable from the seas, for its captains seem always well-prepared to let loose pairs of quickly-loading, semi-guided torpedoes that smash into and destroy anything on the water. While the dual fast-firing torpedo launchers seem like more than enough, each naginata cruiser turns out to have an additional set of five launchers hidden below the waterline. These can launch a spread of torpedoes to attack multiple targets, in the event that the Empire's fleet becomes outnumbered. Weapons such as this speak to how well the Empire has accounted for the possibility of being outnumbered. What's more, these special Type-S torpedoes travel so far below the waterline that even submerged Soviet akula-class submarines cannot hide from them--a fact that contributed to the overwhelmingly one-sided first encounter between the Soviet and Imperial navies. 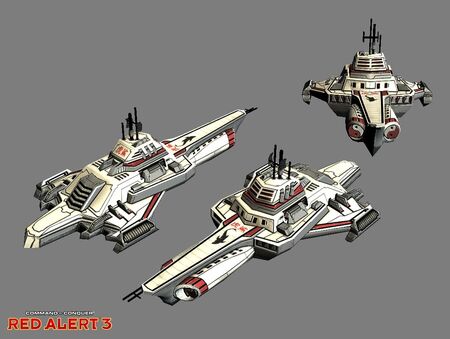 The Imperial navy launched an overwhelming invasion led by naginata cruisers such as this, which can secure the seas more forcibly than almost any vessel.

Studies of the naginata cruiser's weaknesses have shown that indirect fire seems to be the only reasonable way to retaliate against them. Even then, this clinical conclusion failed to note the Empire of the Rising Sun seems always likely to have several of its sea-wing vessels lurking nearby, ready to ambush any aircraft on approach. As for the naginata cruisers themselves, not only are they powerful, they are sleek and maneuverable as well. The speed of these ships enables them to close the distance and then quickly finish their victims, and their unusually strong armor means they can withstand heavy fire on approach to their targets.

It must be considered a great honor to serve aboard a naginata cruiser in the Emperor's navy. These vessels are relatively uncommon, and charged with protecting the mightiest forces in the Imperial fleet, the shogun battleships. Thus the rigors of the required training and responsibilities of the post mean that service aboard naginata cruisers is restricted only to the Japanese elite--men whose stern loyalty to their cause and sharp senses for naval warfare purportedly make them as feared within their society as their ships are hated by their enemies.

Battlefield reconnaissance has revealed at least these facts about the Naginata Cruiser: