Kagami Nano-Deflection Armour is the Tsunami tank's special ability. When activated, power and nanomachines are diverted away from the main gun. The nanomachines form an impact shield capable of protecting the Tsunami Tank from damage, increasing defense and speed and also conducting repairs on the tank at the same time. However, the Kagami Armour cannot be used for extended periods of time, since this will degrade the nanomachines, as such the system can only be used in short bursts to prevent the nanomachine system from complete collapse, and requires considerable time to recharge subsequently. Also, without nanomachines and power, the main gun cannot fire. A side effect of this is that the tank can move even faster than normal, because it is not limited by the main gun target stabilization system. 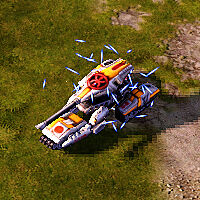