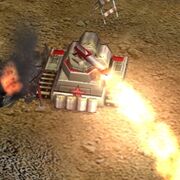 The Chinese Dragon tank's firestorm is a napalm-based attack.

Napalm was a weapon used by the Chinese during the War against the GLA and is a highly flammable chemical that ignites upon impact with solid ground. The Chinese used many mediums for delivering this chemical. One such way was through air power, in which Chinese MiGs would conduct ground strikes using the volatile substance. Also, the Helix too could drop a Napalm bomb directly underneath it, similar to the MiG.

In addition, Inferno Cannons also lobbed napalm filled shells that would burst upon impact, and then begin to burn the target area. All these weapons could create even larger infernos by dropping a large volume of napalm on a target, thus setting a larger, longer lasting fire. Firestorm created by napalm based attack is noted to have huge impact to the surrounding, bringing continuous destruction until its wane out. As such, This weapon should only be deployed with utmost concern to friendly fire and collateral damages in mind. This weapon is China's solution for garrisoned tactic, especially for the Dragon Tank. In several situation, China also use it to counter bio-hazard threat carried by GLA.

Like GLA's toxin counterpart, an upgrade is available for China. This upgrade, known as Black Napalm upgrade, basically change the Napalm formula with ones that will bring in more heat and destruction. The formula is presented as an upgrade as adjustment is to be made on climate and environment concern. The visible trait of this upgrade is the color change of the fire jets from yellow/red to blue/black, signalling more heat it bring.