Natasha is the Soviet commando unit during the Post-War Crisis.

Natasha is tough and optimistic. She also shows mercy to her fellow comrades as demonstrated in Red Wings.

She has complete authority to interrupt Bronislav as sees in certain missions. 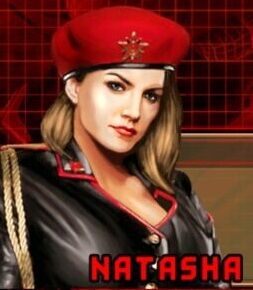 Natasha is armed with a sniper rifle that is effective against infantry. Unlike other Sniper Rifles, she has a rather short ranged one. She is the weakest of the 3 commandos, since she only kills infantry. If she is completly surrounded, the best thing you can do is try to get her out.

Bronislav was killed so she took refuge in one of the buildings. Meanwhile Cherdenko travelled back in time and eliminated Einstein. Natasha's rifle was upgraded and was more powerful and can shoot through infantry.