The Navy is basically the military on the sea, consisting of an assortment of ships and support units, such as the Allied Dolphin. They can be trained at a Shipyard

In WWII the Allies ruled the sea

During the World War II, the Allied Forces possessed naval superiority. They had small, fast gunboats, armed with a 50mm cannon and depth charges and as such were used as light escorts and scouts. Destroyers were competent anti-aircraft and anti-submarine platforms, armed with missile launchers and depth charges. The pinnacle of Allied naval technology was, however, the massive Cruiser. Though inaccurate at longer ranges, the cruiser's gigantic 8-inch batteries had unrivaled range and devastating power. However, they were slow and vulnerable, needing destroyer and gunboat escorts.

A submarine hit by depth charges

The Soviet Union's navy was mostly made up of Type 671 submarines, capable of anti-ship destruction, but useless against ground targets. Developed later on in the conflict, Soviet Missile Submarines were more accurate and versatile against ranged opponents than the Cruiser, but their missiles lacked the range of cruiser shells. Submarines were relatively lightly armored, but they were undetectable except to the sonar systems of gunboats, destroyers or the Sonar pulse, and could only be hit by depth charges while underwater. The USSR also constructed Advanced Tactical Submarines to battle the allied fleet that threatened the primary facility that constructed these deadly submarines.

Both sides utilized similar designs in their sea based Transports to move land units across bodies of water. These transports were unarmed but decently armored.

Typhoon attack subs are the standard subs in the Red navy

The Soviet Navy underwent significant improvements during the 20-years interregnum prior to the Third World War making it even with the Allies navy. The Soviet Union improved its submarines into the lethal Typhoon Class Attack Submarine, these subs were able to stay submerged unless detected or heavily damaged, their powerful torpedoes turned all naval units into flotsam. The Soviets also utilized Sea Scorpions as a patrol craft, and were very effective against air targets and soft land and naval targets. The pride of the Soviet navy was the Dreadnought, a massive capital ship that launch long-range missiles, and coupled up with heavy armor. Giant squids were also utilized, these squids were capable of regenerative health and once it latches itself onto a ship it will not let go unless the ship is destroyed or a dolphin attacks it. 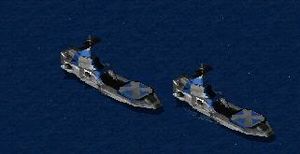 The aircraft carrier is the pride of the Allied navy

The Allied Navy consisted primarily of Destroyers, which are used for surface and coastal bombardment as well as in anti-submarine warfare. The Allies also deployed Aegis Cruisers which was the most efficient anti-air option in the war. But by far the pride of the Allied navy was the Aircraft carriers, which housed the hornets, powerful air fighters that could inflict heavy damage on any unit or building. The aircraft carrier could repair, reload, and rebuild these fighters in short time spans. The Allies have also trained Dolphin for the sole role of fighting off Soviets' giant squids, though if properly micromanaged it can defeat any naval unit. 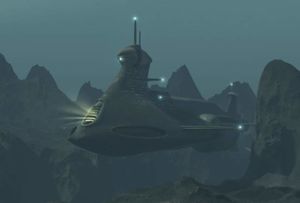 Boomer subs are one of the most deadliest subs in Yuri's navy.

Yuri's navy was unusual in that it featured only one combat vessel, the Boomer. This submarine could simultaneously launch two torpedoes at other sea vessels. It also surfaced to launch ballistic missiles at land based targets.

All three factions used Amphibious Transport, or Hover Transports in Yuri's case, to ferry land units across the seas.

Naval combat in the "Real" World War III was very different - and a more vital front - from WWIII. Improvements to construction yards allowed entire bases to be constructed on water. Also most submarines are known to surface to fire. 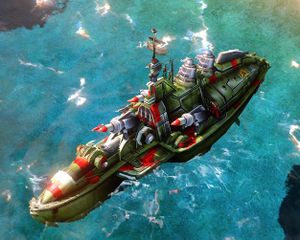 If Soviet Naval supremacy is to have a body, it will take the Dreadnought.

The Soviet Red Navy truly rivals the Empire's consisted of deadly Akula submarines which incorporated devastating ultra-torpedoes and normal tracking torpedoes, as well as lightly-armoured, amphibious Stingrays which are armed with Tesla weapons. Against air targets, the Red Army can deploy the Bullfrogs- which are amphibious anti- air units and doubles as a troop transport. The Soviet Union's naval pride; the Dreadnoughts - are somehow improved to meet the Union's battlefield expectations. Its new, self-injuring rapid missile firing ability, will instill utmost fear to those who stand against the Union.

In the Uprising-era, the now-dismantled Union manufactures and deploys the Grinder an amphibious close- combat tank that can crush anything it sees or gets near to it. Additionally, the feared terror drones now have the ability to swim and attack naval/amphibious units, replacing the giant squid in this altered timeline. 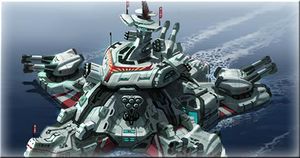 The Imperial Navy is arguably the most powerful in the world and they are only the known faction of three groups to have a Naval-Aviation branch.

Imperial Japanese Naval Technology is unmatched on the high seas with their Naginata-class anti-naval unit torpedo cruisers that hunts anything out in the open waters, and the mighty Shogun Battleships, the "Crown Jewels of the oceans, can bombardment enemy coastlines and can beat a Soviet Dreadnought and Allied Aircraft Carriers easily with their six main guns, and if that's not the case, they can use their Ships to ram right straight into other Vessels that dared to come up to close to these rulers of the seas.

For scout missions, the Imperial Navy deploys the Yari Scout Subs, cheap light submarines perfect for scouting and for attacking smaller amphibious scout and mainline units; and are helmed by fanatical warriors who will resort to suicide tactics if necessary. To protect their advanced warships from air raids, the Imperial Japanese Navy can send small squadrons of anti aircraft submarine seawings to patrol the skies from underwater and are visible and undetected from radar.

Giga Fortresses, are the most powerful assets in the Imperial Japanese Navy, these Naval monsters, can take on Armadas of ships and aircrafts alike from the Allies and the Soviets had in their arsenals, and come out on top of them, their sheer size can even dwarf Allied Aircraft Carriers and Soviet Dreadnoughts on the high seas.

Additionally, the Empire's Tsunami MBTs and Mecha Tengus are amphibious units, granting them battlefield advantage, since they are mass produced, and are common in the Imperial Japanese Military.

The Imperial Navy possesses the Black Tortoise, radar boats, battlebases (which act as training grounds for the Imperial Japanese military) and other large Naval floating fortresses. Yokohoma and Pearl Harbor are the main Naval bases of operations that housed these Imperial Fleets that can go out in the frontlines of Naval warfare. Shirada Docks from Tokyo, Japan that are Responsible for the manufactured of these Mighty Warships.

The Empire have several very skilled admirals, including Naomi Shirada, a fierce admiral and commander of the Imperial Navy who often sends large numbers of Battleships, and Prince Tatsu, who deploys an elite fleet consisting of Shogun Battleships, Sea-Wings and Naginata Cruisers.

Only two naval units can transform into aerial units- the Sea-Wing/Sky-Wing and the newer Giga Fortresses. The Sky-wings are anti-infantry aircrafts that hunts anything on the ground but they lacked anti-armor weaponry. The Giga Fortresses are the biggest flying nightmares, and opposing ground forces have a good reason not to go up against the Empire Of The Rising Sun. These units are part of the Japanese Naval Aviation branch, owned and deployed by the Imperial Japanese Navy.

The Empire's Top Secret Protocol- Fortified fleet upgrade; can enhance and improve the top speeds, armor superiority, expand battlefield scanners, and the firepower of the Empire's naval might.

The Allies Assault Destroyer is a powerful amphibious warship.

Though the Allies Naval Fleet lack attack/strike subs and strong ships compared to their Soviet and Imperial counterparts; they have a vast range of naval units capable of traversing on the ground, and could counter most enemy units deployed by their enemies.

The once naval- use only destroyers, are now able to go on land for amphibious assaults, crush land vehicles and can hit subs without need of an ospery. The new carrier, has 5 Sky Knight UCAVs, which is both an advancement and an increase of aircrafts on board compared to the 3 Hornets it could launch during the Third World War.

The Hydrofoil is an anti-air naval unit, superior in that role to its Soviet and Imperial counterparts, that can disable mobile units and defense structures from firing. Riptide ACVs are amphibious and armed with torpedoes which can be utilized at sea. Acts also as troop transports.

Dolphins are also employed and are trained to jump out of the water to dodge attacks, but once they make a big leap- they are vulnerable to AA.

In Uprising, the Allies' defense contractor; FutureTech, supplied the Allied Military with the Pacifier FAVs and Cryo Legionnaires which are capable of traversing the seas, giving the Allied Naval Fleet a naval battlefield advantage.