New York City was the largest and most populous city in the United States and one of the largest in the Western world.

﻿Starting off as a Dutch settlement named New Amsterdam, New York became English and was renamed in 1674 and grew to become a major city of the United States. The city would become the financial capital of the US and later to the world. Being a source of great wealth, New York was seen as the greatest capitalist symbol the world has ever known. The Statue of Liberty was placed on Liberty Island in the Hudson River as a token of friendship and reward from France. As the city's economic prosperity grew, so did its skyline, resulting in one of the most prominent cityscapes on Earth.

The ruins of New York City are featured in the Tiberian Twilight motion comic.

Once one of the most important cities in North America, New York was not spared from the Tiberium outbreak. Over the years, this once lush Blue Zone was overrun by the alien crystal, which thrived. The Manhattan island became covered with green crystals, which grew to monstrous proportions, as tall as the tallest skyscrapers in the city.[1]

For some reason, GDI decided to place one of its top secret databanks in the New York Public Library Main Branch. A possible explanation is that no one would look for their data in such a god-forsaken place.[1]

Christian Pierce is deployed to the city by Gideon to enter the library and capture the data bank. The city looks even worse on the ground, with Tiberium crystals everywhere. There is also a large GDI presence at the New York Public Library, complete with entrenched defenses.

New York City was a pivotal strategic and symbolic location in the first and final iterations of the Third World War.

New York was one of the first locations invaded by the Soviet Union in the Third World War. The City was heavily bombarded by Dreadnoughts and V3 Launchers, and the Soviets established several major outposts in the region to strengthen their hold on the city.

In the Allied Campaign, Agent Tanya infiltrated the city to liberate the trapped troops in Fort Bradley. The city was largely in ruins by this time and she could not save the Statue of Liberty from being brought down by Soviet missiles. Upon the destruction of the Statue, Premier Romanov delivered a message to the people of New York: "See your liberty, how she lies broken before you...you can continue to mourn your past, or join us in the Great Soviet Revolution!". Sadly for the communist tyrants, their response was all too typical. Allied revenge was swift; Agent Tanya rallied the Allied forces stationed in and around Fort Bradley and dealt a swift blow to the Soviet invaders by demolishing their local outpost, saving the city.

In the Soviet Campaign, New York was where Yuri wanted to test his Psychic Beacon. In the campaign, Soviet forces capture an Allied Battle Lab which was built between the World Trade Center's Twin Towers. After the capture, the battle lab was converted into a Psychic beacon, which caused massive amounts of Allied reinforcements and the city itself to fall under the banner of the Hammer-and-Sickle. 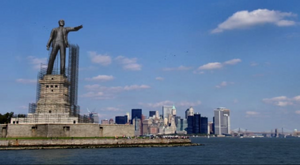 New York, after being conquered by the Soviet Union

New York City was the site of the last major battle in the War in the Soviet perspective. See Operation: Blight on the Big Apple for more information.

After the War, as a reflection of the Revolution's victory, the city was renamed Commandergrad, as a insult to injury, and in honor of the commander, now Premier, who took the city and the world for the USSR. The destroyed Statue of Liberty was rebuilt with a Statue of Lenin and along with the New York Stock Exchange they now belong to the Soviet Union.