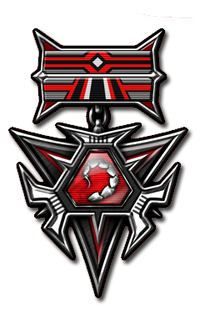 In the Third Tiberium War, the Brotherhood of Nod has awarded accomplished commanders with medals reflecting their skill and loyalty to Kane. Depending on the importance and difficulty of the mission, a bronze, silver or gold medal was awarded. The medal itself was shaped roughly like a triangle and had the emblem of the Brotherhood in the center.

Additionally, if the commander performed exceptionally, fulfilling mission objectives and even going beyond the call of duty, he was awarded the Mark of Loyalty, represented by an award bar on the medal. If he also managed to gather crucial intelligence, the Order of the Grand Confessor was awarded and represented by an additional bar.