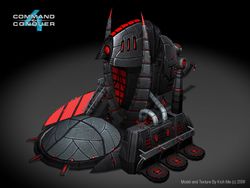 Nod Defense Class Crawler. This is the slowest type of Crawler, and the only one that can produce buildings. Though defenseless when in tier 1, it can gain 2 Obelisks of Light to defend itself when upgraded to tier 2, and even more powerful ones when upgraded to tier 3. Thanks to its speed and inability to fire when packed up, it is nearly useless as a unit in a strike force, but is very useful in defensive strategies, such as holding a TCN Node. It already has very heavy armor and high health, but it can be further upgraded to feature a shield, which can in turn be upgraded to have double power. In combination with the Enhanced Repairs upgrade, which grants an increased repair radius and repair speed, it can be rather hard to take out, especially when multiple turrets are deployed and the Crawler is churning out Centurions and infantry. Its lasers are powerful vs large armoured targets, such as the Kodiak and Mastodon, but are weak vs groups of units.

The built-in lasers also network with any nearby Obelisks, increasing their rate of fire, range, and also possibly damage, and since normal Obelisks can be upgraded to Prism, this gives the Offense crawler a more effective counter to enemy infantry or other light units.

While not normally used to push into hostile territory directly, the Nod Defense Crawler is still capable. Upgrade the crawler with both the mobile and stationary shields and to Tier 2, then pack it up and build an Obelisk, 2 Engineers, and 3 Black Hand infantry. Drive it directly into the target area, deploy the crawler and immediately plant the Obelisk under the shield. Use the Black Hand to dispose of any nearby units (if you have the Range Boost upgrade, you can keep the Black Hand under the shield as well), and build a Bunker for the 2 Engineers. This allows you to almost instantly establish a "beachhead" even deep inside hostile territory.