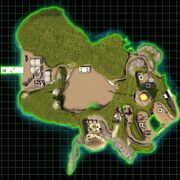 Nod volcano island is a major location in Renegade. It is the site at which the cargo plane Havoc commandered crashed.

The base was built in a valley in close proximity to the volcano, which was used to provide geothermal energy for the base (and also proved to be its undoing when Sakura Obata's Comanche crashed into it). The base itself consisted of a communications center, a Tiberium refinery, a power plant, a dock and an underground storage base. It was heavily protected by island defences, including numerous SAM sites, turrets and a massive shore defence cannon.

Nod wasn't its first occupant, as ruins of a medium-sized town (or fort) are present on the island, in a small inlet. Additionally, remains of a large four-engine flying fortress (registration H-17529) could be found on the island.