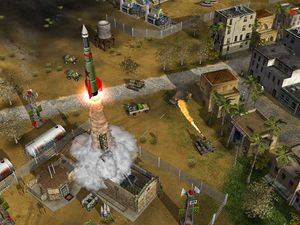 The following upgrades are available from the Nuclear Missile Silo:

Ironically for a missile silo, much of this structure was above ground, and it consisted of a small command center and a horizontally loaded missile launcher, more akin to the launching mechanism behind a Scud missile than an actual silo, and several "casing"(presumably empty casing) dump. The missile launcher chamber is double tasked as a missile construction and a refuel hangar. When required, the missile would be positioned by a powerful piston into an upright position, while the roof retracted. Once fully vertical, the weapon fired. The structure itself was heavily armored with steel and concrete. The destruction of these structures will not "produce" fallout but the resulting explosion can harm any unit that is close it.

The silo was very expensive and used up a large amount of power, and it also revealed itself to all opponents. This made it (or supporting power plants) attractive targets for enemy forces, who would at all costs want to stop the weapon from being launched. Although great against vehicles and lightly defended buildings the nuclear missile was considered less effective than the Particle Cannon and Scud Storm in the war against the GLA, mostly due to the GLA's use of holes beneath their buildings through which personnel could be deployed to rebuild them (although the radiation would kill one or two workers off before they started).

Also notable was that the Nuclear missile was the slowest firing superweapon and as so would lose in a battle against the other weapons as well as be cautiously used in case of a opposing superweapons.

They were first deployed during Operation: Nuclear Winter, where the PLA had entrusted a general of great tactical brilliance to drive the GLA out of Asia.

When the GLA conquered the US European Central Command in Stuttgart, Germany using captured Chinese weaponry, the Chinese government was humiliated enough to order a nuclear strike against the GLA forces that occupied the American base. They later apologised to the European leaders and restrained their use of tactical nukes until the final battle near Hamburg, where the GLA made their last stand using captured American technology.

The nuclear missile silo has a close resemblance to the early SM-65 "Atlas-D" above-ground launchers. Named "coffins", this concrete above-ground structures were designed to store the intercontinental ballistic missile horizontally and put it vertically for refueling just before launch. This system were used to store "Atlas-D" and "Atlas-E" missiles, but with the advent of modification "Atlas-F" (which where silo-based), has been declared obsolete.