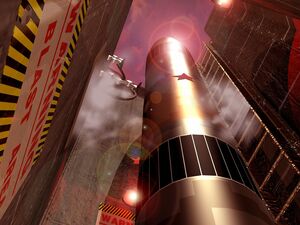 A nuclear weapon is a weapon that takes advantage of the instant and massive release of energy following the fission or fusion of atoms, and the destructive power of said reaction if left uncontrolled.

Some nuclear weapons rely on fission. These are know as "atomic bombs." They work by hav the breakup of a "large" atom, such as enriched uranium or plutonium. Much more powerful fusion devices use a fission device to force the fusion of two atoms of a hydrogen isotope; and are generally referred to as either thermonuclear or hydrogen bombs.

Despite atomic bombs being "small" nuclear devices, their blast yield and destructive potential are still far greater than any conventional explosives. Additionally, nuclear weapons also generate dangerous types of radiation, such as gamma and x-rays, which pose a significant risk to human and any other carbon based life form's health even after the bombs have exploded. The most common method of delivery for nuclear weaponry is through the use of Ballistic Missiles. Two uses of nuclear weapons exist, Tactical usage of which the weapon is aimed at military targets and other tactical targets, and Strategic uses, where the weapon is used on stragegic targets such as factories, residential areas, and financial targets. The Strategic usage is typically done with the vastly more powerful fusion warhead, however it is rarely used this way as It leaves nothing for the user to take.

Witnessing the awesome power of these weapons, Nod took a keen interest in the technology, noticing that not only was it extremely powerful, but modern techniques would make the weapons much more powerful than they were during the World War II. Through unknown means, Nod managed to find and enhance sufficient uranium for a many powerful weapons, much more powerful than the nuclear weapons of the Second World War. Thus, Nod became a second nuclear power in the world, right after GDI-aligned countries. However, as Charles Olivetti stated in an interview for WWN, the GDI member-states had swore never to use nuclear weapons, as the cost for civilians was too great.

Before Nod nuclear weapons could be deployed en masse though, GDI forces intruded onto the holy ground of Nod's first headquarters, in Sarajevo. Not even the power of nuclear weaponry could prevent them from breaking into Nod's bases and destroying the Temple of Nod itself.

GDI continued to stockpile nuclear warheads and their delivery systems after the war, but according to internal agreements, they were stored and their use forbidden. The Australian Outback and numerous heavily guarded nuclear silos in Europe and North America continue to operate and exist to this day.

The GDI command came close to issuing the order to use these weapons against Nod (who deployed their own massive arsenal) in 2047, right after the beginning of the Third Tiberium War. However, the order was never issued.

During Second World War, nuclear weapons were equivalent to large scale napalm runs, capable of killing infantry within its effects, but doing only moderate damage to buildings or vehicles within its effects. However, it could be fired anywhere the owner wished via a nuclear missile silo, and its radius of destruction gave made it a viable option. Note that the above description applied only to sturdy military structures. Against unprotected civilians, nuclear weaponry would be extremely deadly, necessitating the Allies' raid against the first four nuclear missile silos to be deployed by the Soviets.

The nuclear weapons were launched from a nuclear silo that had heavy armor and required a large amount of power. Once launched, they could not be stopped by any regular means.

Nod's nuclear weapons were launched from its command center and holiest place: The Temple of Nod. Thanks to the advanced technology of the time as compared to the 1950s, Nod's nuclear weapons were vastly more powerful than their Soviet predecessors. A direct hit would shatter any building, including a construction yard or an advanced communications center. Furthermore, within the blast radius, other structures were also destroyed - it was not uncommon to see that several structures were destroyed in a hit, and several others were severely damaged. Infantry would be completely obliterated within the blast radius, and vehicles appreciably damaged. GDI commanders were therefore grateful that Nod was unable to utilize these weapons more effectively.

Like the first nuclear weapon, Nod's nuclear weapons were also capable of killing infantry within its effects, but the increased power allowed it to destroy any structure in the area surrounding the epicenter immediately. Some very sturdily built vehicles, such as Mammoth tanks, could survive a nuclear strike, although extremely damaged.

Though short range ballistic missile launches were not a problem, as the missile could accurately hit any scouted target, destroying an enemy position far away from the launch facility with an ICBM was more difficult. To remedy this, the Brotherhood developed the Retribution Beacon, which would send a ultra-low frequency band signal to allow for more accurate guidance of nuclear ordinance at range. This device was only issued to Black Hand squads and commandos, and it permitted rapid destruction of very large GDI formations and structures with tactical yield warheads. This attack was almost guaranteed suicide, however, as the nuclear missile's blast yield was enormous, and someone had to be on site at the target to place the beacon. This means of nuclear strike could only be stopped by using a specialized engineering gun tool, like the GDI Gizmo Repair Gun.

GDI-aligned countries also possessed stockpiles of nuclear weapons and delivery systems (most of this were subterrainian missile silos, whilst the USA possessed a number submarine-launched ICBMs and Russia possessed several railroad-based mobile launchers), but due to internal agreements, they weren't used. Doctor Charles Olivetti stated in a WWN interview, that the cost of civilian lives makes the use of nuclear weaponry unimaginable.

Kane chose not to use nuclear weapons openly during the First Tiberium War, probably to avoid testing UNSC/UNGDI and other world leaders' resolve on the question. This was not to be though at the final Battle of Sarejevo, where Nod forces in a desperate attempt to stop GDI forces, launched nuclear weapons from their complex. It was too little too late though. However, unfortunately for the rest of the world, following the war, splinter Nod factions began to deviate from Kane's typical modus operandi, choosing to use the Brotherhood's nuclear arsenal to full effect, despite the backlash received.

After the destruction of the Temple of Nod in Sarajevo, Nod remnants there attacked GDI recovery efforts in the area, attempting to salvage the ICBMs. Agent Delphi had scouted Nod's positions, and showed GDI forces the best way to strike, ending the nuclear threat, for a time.

Later, during the Global Peace Conference, Nod forces attacked the delegates. A Nod commander, still in control of the South African Temple launched a missile, hoping to wipe out both his enemies within Nod, and the GDI-sponsored politicians. A GDI squad managed to sneak into the area and evacuate the delegates before the missile impacted. In retaliation, GDI forces began a massive assault on the South African base, pinning all Nod forces down inside the area, and airstrikes were called in to destroy the Temple. The commander, disabling all his base defenses to power the Temple, managed to keep his troops in order long enough to fire his final nuclear missile, wiping out the nearby GDI base. Nod forces used this opportunity to abandon the base after destroying any evidence GDI could use to track them down.

The Brotherhood largely limited the use of nuclear weapons during the Second Tiberium War, preferring processed Tiberium as a weapon of mass destruction. It is confirmed that Kane ordered a nuclear attack during this war to destroy Vega's pyramid.

Also, Nod had a plan to mount nuclear ICBMs on mobile launch platforms and destroy the GDSS Philadelphia, however GDI commander Michael McNeil managed to put an end to this plan during his assault on Kane's Cairo base. 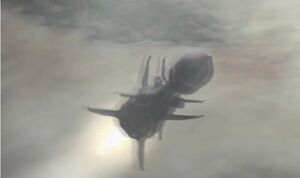 Nuclear Ballistic Missiles once again became an extremely vital part of the Nod arsenal after their defeat in 2030. Slowly rebuilding, a massive silo complex was erected and held much of its nuclear arsenal. A nuclear ICBM was responsible for obliterating the GDSS Philadelphia, succeeding what they have failed to accomplish in TWII.

GDI possessed less destructive nuclear weapons, stored in protective storages in the Australian Outback, or mounted on ICBMs in a number of GDI-operated missile silos (the latter were kept ready for launch anytime). But the order of using these weapons was not given, first because Nod forces were scattered in populated areas, and civilian casualties would be significiant. Due to internal agreements and despite their desperate situation GDI did not sanction the use of strategic Nuclear attacks against the Scrin, although their major bases were in the unpopulated Red Zones. It is probable that in the wake of the Sarajevo fiasco, the GDI brass feared creating dangerous Tiberium fallout again. In any case the agreements were considered to be a cynical one, since GDI's ion cannon had more destructive power and no radiation effects than their nuclear arsenal.

After Cairo fell, Nod was forced to hijack GDI nuclear warheads in Australia, and hack GDI's launch codes from a Technology Center in Sydney. After this, the missiles were launched, once again, from the crown jewel of the Brotherhood, the Temple of Nod. One such warhead was used to destroy GDI's presence in Sydney, following Kane's re-emergence.

Nukes are still launched by the Temple of Nod. They take 3 minutes to become fully charged and gain new Tiberium upgrades to make them stronger, allegedly every minute or so. They do good damage when normal but eventually gain a tiberium core and then a tiberium catalyst/nuclear warhead to seriously damage whatever's in their way with deadly liquid tiberium. The Temple of Nod that fires the missiles requires a high tech level (most likely tier 3) using the Defence Crawler. These missiles were launched by Nod against the GDI Commander in the final mission For All Humanity, to destroy GDI's foothold at one side of the tower.

In CNC3 Tiberium Wars, nukes do not leave radiation behind.