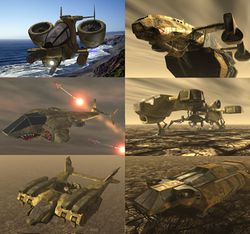 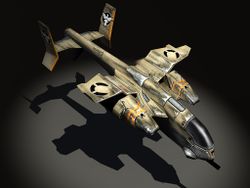 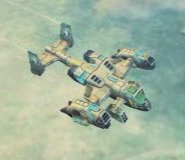 Orca aircraft are a family of turbofan-powered VTOLs developed and employed by GDI starting in the First Tiberium War at the end of the 20th century. The Orca's most common form was a close support gunship, although the number of types briefly expanded during the Second Tiberium War.

The development of the first Orca, the ORCA Assault Craft, was completed during the First Tiberium War.[1] The aircraft validated the concept and it served as the spiritual progenitor of a series of other light scout aircraft right through to the Third Tiberium War.[2]

Nod was less impressed with the ORCA after studying captured examples.[3] The use of turbofans increased fuel consumption and infra-red signature. Nod opted to retain traditional attack helicopter gunships through to the Second Tiberium War.[4]

Orca development continued apace after the First Tiberium War, falling partially under the auspices of Project Orca AD02/337.[5] Tactical aircraft were designed to fill roles from the familiar gunship to air transport. The technology was also used to create the large Orca Command aerospace command units.

Many of the new Orcas used articulating turbofans and eschewed wings like the ORCA Assault Craft. The Orcas, like other contemporary aircraft, were disabled by ion storms.

The dominance enjoyed by Orca's in GDI's aerial arsenal disappeared after the Second Tiberium War. Fixed-wing aircraft like the Firehawk, and the V-35 Ox took over the tactical bomber and airlift roles, respectively. The Orca Mk. III retrenched into the light scout and attack role.

Many of the Orca replacements retained VTOL capability; the fixed wing aircraft used articulating turbofans like earlier Orcas. As another example of cross-polinization, the Orca also incorporated short wings with lift engines, with another set of engines optimized for horizontal thrust like in traditional fixed-wing aircraft.

The Third Tiberium War revealed Nod's transition to the Venom, a light turbofan-powered VTOL. The Venom's performance impressed GDI but opinion was divided on how to improve the Orca. From the First Tiberium War, the light Orca designs were conservative and took their inspiration directly from the example and role set by the ORCA Assault Craft. Believing this was the root of the problem, a civilian development program attempted to create a light Orca successor, the Orca Mk. IV, by altering the paradigm. This failed.[2]