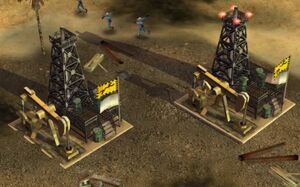 Oil was a resource extracted from oil derricks and used as a minor constant credit boost in Red Alert and Generals universes. In the Tiberium universe, oil did not commonly appear.

In Generals 2, oil was originally intended to be a second resource that was to be extracted through oil derricks placed on oil wells. Based on community feedback, this idea was scrapped and the old oil mechanic was restored.