Oleg Vodnik is one of the few conscripts that manage to survive long enough to be promoted. A casual and informal commander, he has proven that he is a competent commander. He is quite popular among his underlings.[1]

Later he became tank commander and now he leads the Unions's mightiest armor divisions.[2] He takes a particular liking to the heavy armor units of the Soviet Union, as a former tank commander. His men tend to appreciate his lack of formality, though his superiors sometimes don't.[3]

Vodnik is extremely respectful towards the Soviet Commander. He treats him as a friend, partner in crime, equal and even holds as a renowned superior officer. This Russian Commander is loyal and fierce.

He was in charge of the defense of Heidelberg, where a major Soviet military base was situated. Later, he was in charge of launching Kirov Airships from modified Sport Arenas in Havana to attack US cities. In both cases he was defeated by the Commander. He is also the only Soviet commander not to have worked with this said Allied counterpart.

He is a long-time friend of a little-known but highly successful Soviet commander, and often accompanied him in battle. They fought together in the Soviet Campaign defending Leningrad from Kenji's battleships. There Oleg claimed that his old friend could always push him around. Again against Commander Lissette in Geneva, and once more against Commander Giles and the "traitor" Soviet General Krukov in Iceland. The Tank Commander expressed his contempt towards Krukov when Cherdenko contacted him and the Soviet Commander concerning the "treachery" of the foolish General. The Russian officer shouted to Krukov : "Burn you old fool, you had this coming." The Tank Commander is very satisfied to fight alongside his Russian brother in arms.

In the Imperial Campaign he was in charge of the (futile) defense of Vorkuta on the day of the Imperial invasion, using Tesla Tanks. Unfortunately, Oleg Vodnik did not stand a chance against the Shogun and Shinzo and perished on the verge of New Year's Eve. Although he was defeated, Oleg did not fall as a coward but as a fierce soldier of the Soviet Union. 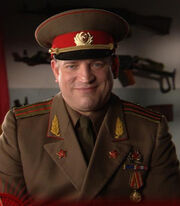 Commander Oleg was tricked into accepting the position of the Head of Soviet Military Affairs following the Third World War, as the Soviet leadership desperately needed a scapegoat. He maintains an unflappable attitude despite the hostility shown by the Soviet people towards him.[5]

However, Oleg is far from being a failure. Under his leadership, the Soviet military has seen several developments and had research operations worldwide, even as it was scrutinized by the Allied Forces following the war. These projects included an advanced Iron Curtain project (able to render entire bases invulnerable)[6] and giant war bears created from American bears (on their own soil no less).

During The Uprising, he attempted to take the Sakhalin Island from Kenji's forces inter alia by using his new battle machines, the Grinders. Unfortunately, The Empire snuck inside the unguarded part of his base and attacked Oleg from behind. Oleg had to retreat.

Later, The Empire destroyed his base as well as Moskvin's stronghold in Vladivostok by using their newest weapons, the Giga Fortresses. Oleg blamed the defeat on his fellow comrade and admitted the Empire's victory that time but said that their country will not be in safety forever. It is highly possible that Oleg and Moskvin fell in battle with their forces, should he have survived Oleg will not abandon Mother Russia and will return to serve the leadership of Dasha Fedorovich.

Oleg appears in the Commander's Challenge with his office being from The Uprising as Head of Soviet Military Affairs following the Third World War. As said, FutureTech and their Allied forces had found research projects Oleg was trying to do and use them, but Allied leaders disbelieved FutureTech's story and were scrutinized following The Uprising.

Oleg for the first time meets the Futuretech Commander in Niger. He will use Apocalypse Assault Tanks to get rid of the player. However, he is defeated in turn by the player who needs the armoured vehicle for his experiment.

After Douglas Hill's defeat in Canada, the Futuretech Commander got word that Oleg is using American bears on their own home soil with a type of experimental machine called the Ursa Major. Oleg said the bears were quite powerful and wants to transport them back to the Soviet Union, but changed his mind after being defeated by the player.

Behind the Iron Curtain[edit | edit source]

With FutureTech's second mission beginning on Soviet soil, Oleg has got another weapon up his sleeve and working on it. The Iron Curtain is known to render entire Soviet bases vulnerable and Kelly Weaver, the Futuretech Commander's superior must snatch it from him. Oleg got defeated and the Iron Curtain is worked on by FutureTech scientists in Amsterdam.

Be Quick or Be Dead[edit | edit source]

In the DRC (Democratic Republic of Congo), Oleg joins both Douglas Hill and Takara Sato in a battle against the Futuretech Commander. All three Commanders were defeated with the Rocket Angel in FutureTech's hands and Douglas Hill gives the Commander as quoted loudly "You cocky little bastard".

Oleg has decided to move on and use a Grinder in India. FutureTech is told that the Soviets will crush their own soldiers by using the Grinder's rollers. The Futuretech Commander goes there and fights Oleg off until the maker of that Grinder is defeated from using the vehicle over and over again.

In a last stand inside the Soviet Union, Oleg joins Vera and Moskvin to use Kirovs against FutureTech and push them back into either Asia or Europe. The Futuretech Commander manages to defeat them including Oleg and the Kirovs were taken.

To conquer Madagascar before heading for South Africa, FutureTech wishes to finish Oleg for his last appearance in the Commander's Challenge. To end this, Oleg decided to use one more weapon called the Vacuum Imploder to vacuum the Commander from the area. Oleg is defeated and the Soviets were crumbling with pockets of resistance except Vera in South Africa with Giles Price at her side.

He prefers massing tanks to crush the enemy on the ground while placing less emphasis on air and naval units. Allied commanders unfortunate enough to encounter him reported being attacked by waves of tanks (namely the Hammer tank along with the feared Apocalypse).

Less commonly he uses fearsome Kirovs in the air and Dreadnoughts supported by Akulas in the water.

Oleg is also a great user of the Iron Curtain.