The Operations Center was a Nod field structure employed during the Third Tiberium War. Its advanced communications arrays were required to support more advanced Nod structures.

The Operations Center unlocks the second tier of units and structures, and provides a wide range of support powers. In Kane's Wrath, two upgrades are made available from the structure.

It is Nod's functional equivalent of the GDI Command Post, and the Scrin Nerve Center.

The Dozer blades, signature generators and Liquid Tiberium core power plant upgrades are provided by the Operations Center rather than the Technology lab. It also allows the purchase of the valuable Quad turrets upgrade to all turret base defenses, and the Laser fence defensive structure. Additionally, building an Operations Center unlocks the Beam cannon in the War Factory and does not require the Tech Lab, unlike in Tiberium Wars.

Certain support powers are enabled or disabled depending on the Nod faction used. The Black Hand subfaction cannot use the Cloaking field support power, but is the only Nod subfaction that has access to the Power signature scan intelligence power. 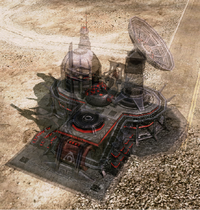 The signature generator can be seen next to the radar dish
Retrieved from "https://cnc.gamepedia.com/index.php?title=Operations_center&oldid=64179"
Categories:
Hidden category: