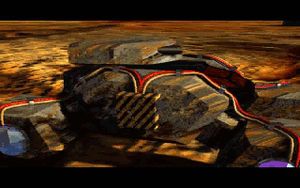 Close up of a first generation stealth tank, notice the Lazarus shield wiring

Optic camouflage was a type of stealth technology developed by the Brotherhood of Nod.

The latter developed stealth bubble technology of the 21st century suffered from a flaw that have never been countered due to the nature of the technology are that if stealth tanks run over infantry they will temporarily reveal itself, units and structures firing will also temporarily decloak. Also, all stealthed units can be detected with sufficiently advanced sensors (which are rare, due to their cost and sophistication). If a stealth vehicle is heavily damaged it will have a hard time cloaking.

These drawbacks and expensive stealth technology was the reason why the Black Hand chose to use their conventional and powerful ground force.

As a gameplay mechanic such the Tiberium metaverse is concerned, Stealthed units are simply invisible to enemy players and destealth when firing or damaged. Starting with Tiberian Sun, countermeasures against stealth were developed and more than just Stealth Tanks were given the ability to cloak. From Tiberium Wars and on, Base Defenses and some units detect stealth.

Due to its nature, the Brotherhood had always placed an emphasis on guerila combat which included tactics based around stealth warfare. This eventually branched into the research and development field which led to the creation of technology called a "Lazarus shield" which was essentially an adaptive camouflage system that rendered any object or user invisible to the naked eye.

The development of this stealth technology saw active deployment during the many conflicts that raged over Tiberium and started in the First Tiberium War where it became a common aspect of Brotherhood technology. Nod began to field it amongst their units with the first vehicle to feature the technology being the Ezekiel's Wheel stealth tanks which were equipped with rocket launchers. Staying invisible, they could sneak up on unsuspecting Global Defense Initiative forces and cause major damage to unprotected ordnance and facilities without warning.

During the course of the war, personal Lazarus shield cloaking systems were developed under the codename Ezekiel's Cape and issued to the elite Black Hand Chameleon units. Their wearers were rendered nearly completely invisible, and as such used as spies, assassins and saboteurs, all of these roles supported by their standard issue Firefly laser rifle. Firing (as always) disrupted the stealth field. However, in the First Tiberium War, the stealth technology was still being perfected, and all cloaked units could be seen by infantry at close range when a distortion effect occurred around the cloaked object. 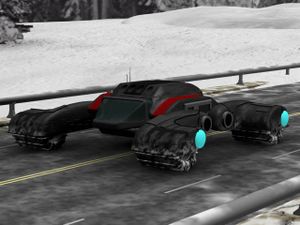 In the Second Tiberium War, the perfected stealth technology allowed for construction of a stationary stealth generator, which under sufficient power could cloak entire buildings in a 200m radius. These devices were used to protect critical installations, most notably the prototype factory, where Nod manufactured the first series of Banshee fighters. Towards the end of the war, Nod developed mobile stealth generators, which could be deployed and relocated easily, but with a smaller cloaking radius. Personal Lazarus shield systems also found their use, as they were employed by Nod's Chameleon Spies who were elite stealth units that were used to infiltrate and sabotage GDI operations. Newer stealth tanks were still in wide use among Nod forces.

They saw active usage during the conflict as well as during the Firestorm Crisis. 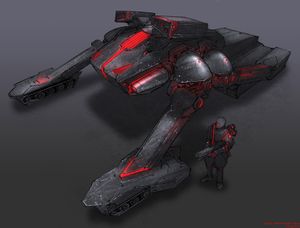 In the aftermath of the Second Tiberium War, the Brotherhood Archives were destroyed, leading to the loss of centuries worth of research conducted by Kane. However, it was discovered that GDI had managed to duplicate Nod's stealth databank which it was analysing at a covert research facility located at the coast of Northern Australia though they were unable to reverse engineer it and thus the data was archived as well as left defunct behind the abandoned base. Thus, Kane dispatched LEGION to retrieve the databank and reclaim the stolen Brotherhood technology from GDI forces in the region.

LEGION managed to successfully retrieve what was rightfully Nod's, and captured the laboratory the research was being decrypted at where the AI uploaded the data. With their database back, Nod further extensively researched and further upgraded their stealth systems, resulting in the development of Vertigo stealth bombers, highly efficient and inexpensive Disruption towers, advanced Stealth tanks, cloaked Specter artillery and Harvesters, next-generation stealth suits used by Nod's elite Shadow Teams and personal cloaking devices (used by the Nod Commando). Other products include Disruption pods and the Cloaking field support power. Avatars can commander technology stealth tanks to hide from enemies.

In the time of the Ascension War, optic camouflage became advanced enough for stealth tanks to be able to hide allied units behind a cloaking field. Crawlers and Cyborg Commandoes sometimes use optic camouflage to ambush their enemies.