The FTC-X3 Pacifier Field Artillery Vehicle (or Pacifier F.A.V.) was a self-propelled artillery hovercraft designed and produced by FutureTech following the Third World War. It entered limited service with Allied forces after the war.[1]

The Pacifier had two operating modes. In mobile form it was propelled by four independently-articulating hoverlifts and armed with two 7.62mm miniguns; the lifts gave good all-terrain and amphibious mobility. The miniguns were sufficient against infantry. Deploying the two 150mm artillery Grand Cannon required the Pacifer entrench using the lifts as stabilizers. The transformation was handled by the "Turnkey" deployment mechanism.[1]

Artillery targeting was through a holoscanned designator which forewarned the target area of an impending barrage. Each volley could fire multiple proprietary FutureTech collider-bomblets. The projectile dispersion ensured the target area was saturated. The bomblets were effective against all manner of ground targets.[1] 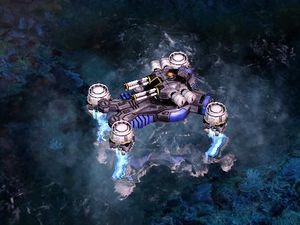 With the benefit of hindsight, the military-history community now generally agrees that the Allies' orbital defense network proved to be critically important to their eventual victory. The Athena SatNet did not always enjoy such favorable opinions, of course: The SatNet program was nearly blackballed due to public pressures concerning exorbitant development costs. Today, it is difficult to imagine how the world would be different if not for the Athena Cannon and its eponymous target-designating vehicle. But in spite of how the Athena Cannon proved essential for cracking the Soviet Union's and Empire of the Rising Sun's most formidable defenses, the orbital defense network was indeed so costly that it did not scale with the escalation of the Allies' war efforts on two separate fronts. Simply put, the SatNet could only be in so many places at once. As the Allies managed to secure their borders and take the initiative, the SatNet's limited coverage meant only a privileged few Allied commanders had the authority to call down Athena's wrath. Recognizing the opportunity in this, Amsterdam-based FutureTech Corporation set about developing an alternative long-range bombardment solution: the FTC-X3 "Pacifier" Field Artillery Vehicle. With its all-terrain locomotors and a state-of-the-art 150 mm cannon, the Pacifier will surely make the Allies' remaining opponents think twice before entering any demilitarized zones.

Unlike the Pacifier's fire-for-effect artillery barrages, the Athena Cannon is based on the principle that precision strikes from orbit can be used to cleanly dispatch enemy installations and heavy vehicles while minimizing the risk of collateral damage. At the same time, the vehicles used to target for the orbital cannons use such a complex encryption system that the danger of having these weapons fall into enemy hands is virtually nil. Nevertheless, dozens of Athena Cannon ground vehicles were destroyed in the last desperate months of the war, as the Allies' enemies naturally assigned these dangerous elements an extremely high priority. The Pacifier's design directly addresses all these shortcomings, even though the vehicle and its firing system went into development around the time the first details of the Athena SatNet were disclosed. Additionally, the Pacifier boasts a number of groundbreaking innovations that should help ensure the Allies' postwar sanctions are duly respected. 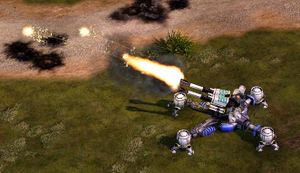 Specifically, the Pacifier is built on a streamlined, all-terrain chassis that uses four independently-articulated hoverlifts to carry the vehicle over land and sea. Cases in which Athena Cannons got stuck on terrain outcroppings should be a thing of the past. These very same hoverlifts are what clamp the Pacifier firmly in place when the time comes to deploy its Grand Cannon, a twin-barreled 150 mm artillery piece that fires salvoes of FutureTech's proprietary collider-bomblets across extreme distances. While the Grand Cannon lacks the pinpoint precision of the Athena Cannon, it features an even greater maximum effective range, superior stopping power, and a wider area of effect. All this makes the Pacifier much better suited than the Athena Cannon against clustered enemy emplacements or armor columns. Furthermore, in its mobile form, the Pacifier is well-protected by dual miniguns, packed with more than enough stopping power to deter enemy assault forces. Therefore the Pacifier still has considerable defensive capability even if enemy combatants somehow manage to close within the effective range of its primary weapon. 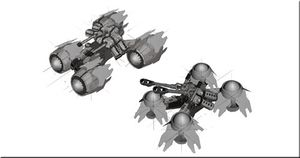 Because the war is over, the Pacifier is unlikely to see full-scale production in the foreseeable future. Should the need arise, however, FutureTech Corporation will be ready, and is constantly using the latest test data to perfect the Pacifier's design. Allied forces have already commissioned a number of these vehicles for use near some of their more-hotly-contested border zones, including key coastal regions in southern Japan. Technically, the Pacifier's performance in real combat scenarios has yet to be seen and evaluated. Even so, Allied commanders have high hopes, based on evidence from live-ammunition test results, as well as FutureTech's proud reputation as a world-leading purveyor of high-quality military-grade hardware.

In Raid on Lost Castle, it was revealed that the construction of these vehicles was accomplished with the aid of captured Soviet scientists who were forced to develop a long range artillery mechanism for use by the Allies.

In the Imperial perspective of the Uprising, Crown Prince Tatsu ordered the Imperial commander to hijack four of the Pacifier FAVs from an Allied outpost to ambush the invading Soviet fleet from Oki Island.

The Allies also made use of them against the Imperial Commander Takara Sato and, after defeating her, Prince Tatsu when he turned on the Allies during that same battle.

Pacifier FAVs were brought in to forcefully put down a prison riot in Camp Dakota on Guam island. However, they were destroyed in turn by the instigator Yuriko Omega.

Notes from the Field[edit | edit source] 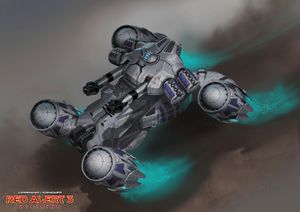 Battlefield reconnaissance has revealed at least these facts about the Pacifier FAV:

• The Grand Cannon -- The most important feature of the Pacifier is its twin-barreled artillery piece, which features the longest range and most devastating impact of any terrestrial artillery platform used in recent times. Not much can withstand a single volley from the Grand Cannon, which can shatter enemy defenses, installations, and formations. Even the best armor, such as the Apocalypse Tank and the Assault Destroyer, and even the incredibly heavily armored Future Tank X-1, can be severely damaged with a few hits from the Grand Cannon. Because of its blast radius and 85-percent "on target" accuracy rating, the Grand Cannon is most suitable for areas in which collateral damage is acceptable.

• All-terrain capability -- The Pacifier may travel across all terrain, including water, and does so with considerable speed and minimal noise. Its miniguns defend it during transit, offering full 360-degree coverage without exposing the turret gunner to hostile fire. The Pacifier may only deploy its artillery on flat surfaces.

• Early access -- Part of FutureTech's competitive proposition with the Pacifier involved making it more accessible than the Athena Cannon. As such, the Pacifier is available to Allied commanders with lower clearance levels than those needed for the Athena Cannon. However, the still-experimental Pacifiers are relatively expensive and may only be requisitioned with an Allied Defense Bureau present area to record performance data and liaise with FutureTech supervisory teams.

• Known issues -- In spite of dual miniguns and respectable armor, the Pacifier cannot take on heavy vehicles in close quarters, nor can it respond to enemy aircraft. It is therefore best used in a well-protected rear rank. Also worth noting is that the Pacifier's holoscanners can be seen by friend and foe alike. Forces in danger-close range of the targeting lights are strongly advised to clear the area immediately.

• Projectile Speed —The collider-bomblets from the Grand Cannon take a relatively long time to reach their target, thus most units can escape before it hits them. Most frontline infantry, such as Conscripts, even with their slow speed can evacuate the blast area before impact when the Grand Cannon is firing from maximum range. However, coming closer, they may not get so lucky as the bomblets only have to travel a shorter distance. Therefore, Pacifiers may not succeed in defending a base.