Operation: Pillage the Village is the second mission in the GLA campaign of Command & Conquer: Generals.

In the wake of Black Rain against the "Eastern Dragon", the Global Liberation Army found itself short of funds to launch its next mission. When new intelligence suggested the arrival of UN convoys carrying food and supplies in the villages outside of Almaty, Kazakhstan, a GLA raiding force was sent on an unorthodox fundraising mission. The group would raid the convoys and take what they saw as rightfully theirs.

The initial phase of the battle saw GLA troops arriving stealthily to the battlefield. The GLA built a small base in the hills over the city and began intercepting convoys for arms, supplies and money worth $20,000. There were widespread atrocities committed against the civilian population that the GLA claimed to fight for. Villagers receiving UN aid were described with contempt by GLA Rebels as "sheep" greedily and shamelessly waiting for their "handouts". When civilians began hiding the aid in their homes, the GLA Commander was given authorization to loot the city. GLA Marauder Tanks destroyed people's shops and homes mercilessly, taking anything of value from the smoking ruins.

Meanwhile the Americans arrived in the area and set up a support base to the north of the villages. The United Nations - after losing many soldiers to GLA highwaymen - switched to dropping supplies by plane. Now wishing to collect $30,000, the GLA contacted their Arms Dealer who provided them with Quad Cannon half-tracks, which boasted a powerful anti-aircraft gun.

The Americans attempted to deal with the GLA  by using Crusader Tanks but the Marauders proved to be a match for them, especially when their guns were upgraded with salvaged parts. The support base ended up being reduced to rubble by the GLA tanks.

When the looting began to get too serious, the Americans attempted to construct a base on the hills overlooking the villages. However, the GLA swarmed into the area and destroyed the Dozers and the escorts before the Americans could gain a proper foothold.

As soon as the collection target of $40,000 was reached, the GLA left the area. The Commander was sent to the nation's Chinese-occupied capital, Astana, where GLA sympathizers had started a rebellion to collect $40,000 by destroying the city. 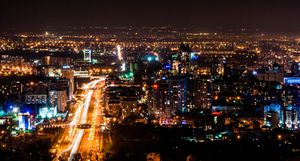