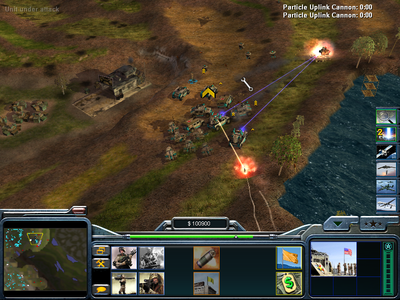 Red laser counterattack missiles, Blue laser is for accuracy improvement of your allies.

Some versions of the point defense laser are more advanced than others. For example, the Paladin can only shoot down a single missile at a time, while the Avenger can fire much more rapidly, even holding off the fire of multiple stinger sites.

The two ground platforms that employ this weapon are the Avenger and Paladin tank, given the different roles of those two vehicles they had different capabilities. The primary difference between the PDL's of the two is that the Paladins is capable of engaging the enemy (Albeit only at short range), although due to its lack of power it is not employed against vehicles or structures, and as such is used against infantry. The Avenger on the other hand uses it's PDL in an exclusively defensive manner, with it only being capable of intercepting missiles (At a much higher rate than the Paladin) and thus incapable of targeting infantry.

It should be noted (to clarify that the PDL does not fill all the Avengers roles) that the Avenger makes use of 3 Laser systems, the PDL, the target designator and the rear mounted Dual laser cannon for anti aircraft engagements, making it the most sophisticated laser system employed at the time of the War against the GLA.

Early in the GLA conflict, the Paladin was the only unit capable of the using the PDL. Because it was (and is) so advanced, the General had to use an General-ability, to ensure the technology did not fall into enemy hands.

When the Paladin showed its effectiveness at destroying Stinger Sites, the PDL was further developed, possibly mainly by General Townes.

This resulted in a large armada of laser-based weapons, such as the Laser tank and the Laser Defense Turret, but because high expertise is required, both are only available to General Townes.