Prisonbreak is the third mission of the Nod campaign in Tiberian Dawn.

The military dictator of Sudan, while officially neutral in the First Tiberium War had thrown a large number of political leaders supportive of Nod into prison camps near Kafia-Kingi and Al-Ubayyid.

Understanding that the loyalty of his own military and police forces was ever suspect, he had placed the prisons under the control of the GDI who, understanding the importance of the prisoners had wisely installed a large armed guard around the prisons.

The Assaults on the Prisons[edit | edit source]

After their victory in the Invasion Of Egypt some Nod forces moved south, aiming not to engage the Sudanese military but to capture the prisons and free their political supporters. While the prison guards were numerous and reinforced they did not enjoy the aid of heavy weaponry or air support. Nod forces were able to defeat the prison guards and by using their engineers they gained control of the automated systems controlling the prisons. With those systems under their control they were able to free all the prisoners. 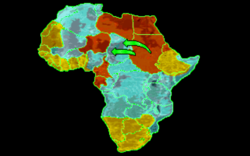 Having acquired control of Chad, Nod forces were able to conquer a foothold in Ethiopia.

With the release of the imprisoned political leaders, Nod supporters in Sudan including in the military were inspired to launch a coup to remove the military dictator that had imprisoned those leaders. With the prospect of a Nod invasion from Egypt looming should the coup fail the rest of the Sudanese military stood aside. The military dictator of Sudan was thus overthrown and the liberated political leaders took power, establishing a new regime loyal to Nod in Sudan.