Psionics, according to recent intel surveillance, involves the military usage of extrasensory perception (ESP) inside an individual's mind in the Empire of the Rising Sun, the first to utilize such unconventional technologies being the Soviet Psychic Corps. From mind control to psychokinesis, psionics proved to be the ultimate abomination when used in the wrong hands.

A Psychic Dominator in Egypt

In the Third World War, the once-defeated Soviet army, with the help of Alexander Romanov's chief advisor Yuri, developed the first psionic technologies for military use, mainly controlling the minds of the enemy like what a puppeteer does to puppets on strings. Back then, psionics were called "psychics". Mind controlling the foe was involved in the strategy that led the Soviet Union to invade the USA, an Allied nation, and effortlessly take control of major states. The forms of psionics during these two conflicts were seen in Psi-Corps troopers (later discovered to be clones of Yuri himself) that controlled single enemy units, the Mastermind tank that controlled multiple enemy units - but overloaded when exceeding the control limit, the Psychic Dominator superweapon, which made all hostile units be one with Yuri in a narrow target area once unleashed, and the Psychic Amplifier, which was designed to be powerful enough to control all population in North America, virtually erasing any sign of military resistance.

Allied-hijacked Yuri Battle Labs yielded another psychic infantry, aptly named the Psi commando. Theoretically, they represent Allied reverse-engineered psionics and would have been utilized to turn the greatest gift of Yuri and the Psychic Corps against them.

However, after the defeat of the Soviet Union, Yuri has uncovered his betrayal and began to control the Earth's population with his secret weapon: the Psychic Dominator, leading to its namesake crisis. However, thanks to joint Soviet-Allied operations, Yuri's army was neutralized, and the psychic defector was placed in a Psychic Isolation Chamber (PIC), designed to isolate his psychic powers.

War of the Three Powers / The Uprising[edit | edit source] 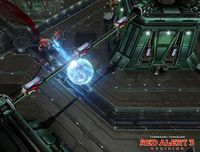 In the aftermath of the Psychic Dominator Disaster, Anatoly Cherdenko's chrono-erasure of Einstein seemingly erased Yuri and his psychic technology in the process, but in the altered timeline, the Empire of the Rising Sun developed their own psionic technology by the time of the War of the Three Powers, courtesy of Shiro Psychic Research. However, what the Soviets used psionics for control, the Empire uses it for a worse purpose: destruction.

Yuriko Matsui (along with Izumi), was an Imperial commando, thanks to the program held on Shiro Sanitarium, using her sharpened mind to crush the Empire's enemies. In Yuriko's perspective of the Uprising, she appeared to develop new powers, including a Psi-Shield to stop enemy attacks. Yuriko also developed Psionic Talents, allowing a Commander to change her powers and make her do various talents, such as psychokinetic lifts (lifting up enemies) and psychokinetic throws (throw lifted enemy units at targets).

Another example is the Imperial superweapon, the Psionic Decimator, that generates a thunderstorm of excessive amounts of psionic energy, bludgeoning anything in the designated area when unleashed.