The second iteration of World War III was the repeat of the struggle as a result of Allied temporal manipulation. The first iteration resulted in an Allied victory over the Soviet Union. However, immediately after that victory Yuri activated multiple Psychic Dominators across the globe, whose construction had been masked by the larger struggle.

The Allies used a prototype time machine to return to the beginning of the Third World War to not only defeat the Soviets once more, but to avert Yuri's plan for world domination. The war is also known as the Psychic Dominator Disaster, as referred to by Albert Einstein prior to the Allied time journey.

The conflict ended, but hatred between the Allies and the Soviets had remained. This eventually led to the Post-war Crisis.

In the year prior to the disaster, the Allied Forces were at war with the Soviet Union, who on the ambitious Premier Romanov's orders, sought to conquer their rivals, the United States of America and with it is the entire free world.

Despite the Soviet Union's initial advantages, the Allies were victorious, having defeated the Soviets at Kremlin and captured Premier Romanov alive, who was imprisoned in the Tower of London. But their victory was not complete as Yuri, the former advisor to Romanov had escaped capture from the Allies.

While the world celebrated its victory over the Soviets, Yuri and his Psychic Corps set out on their own to create his own faction and with it, Yuri assembled his plans for world domination. Under supreme secrecy, Yuri's forces constructed a series of Psychic Dominators across the globe, one of which was placed on Alcatraz Island in San Francisco Bay.

After the American government discovered this, Yuri announced that he was about to take over the world: mind, body, and soul. Refusing a full presidential pardon, he went on to deploy his series of Psychic Dominator devices, which could release enough psychic energy to Mind control the entire world.

The Allies were desperate - at least, those still not affected by Mind control. Even if Yuri couldn't get the Dominator back online, he had mind controlled most of the world and could send an incredible army to take over the last holdouts in using his powers to insure no guerrilla resistance and no opposition to his rule, ever again.

The Allies turned to Albert Einstein and he delivered. He managed to modify a Chronosphere to operate as did the original Philadelphia Experiment, producing a machine that could take people back in time. However, the Soviet spy network was remarkably well informed, apparently having been able to infiltrate Einstein's technical team.

They smuggled out a complete blueprint of the device, from which Soviet Engineers crafted operating instructions. The information was also passed to the Premier in London ready for his commander to secure the important artifact and an invasion by himself.

Following the disturbance in the time stream, the Allies did go back in time to before the Soviet entrance into the time stream and destroyed the Psychic Dominator again - for the first time. Also, they eliminated the Soviet Pacific Fleet that was in the midst of invading San Francisco, saving the city and disrupting the first Soviet occupation. Fortunately, no Time paradox was created - yet.

Yuri realized that somehow, the Allies had determined his true intention despite his precautions and abandoned his extensive plans for camouflage. Meanwhile, the Soviets planned to destroy Einstein's lab in the Black Forest.

Yuri began operating more directly and went on the offensive: he began grinding Civilians in Hollywood with his horrific Grinders through the use of subliminal messages, reducing them into biological components for his war machine.

However, he was unable to convince Arnnie Frankenfurter, Flint Westwood, or Sammy Stallion, as they were all very familiar with television, transmissions and propagandized broadcasts. These heroes proved that they were formidable off screen as well as on-screen, and assisted with the demolition of Yuri's base. During the battle, technology from the future was used to create the Battle Fortresses and even a local Chronosphere.

The Allies then turned their attention to Seattle, where the Massivesoft headquarter was under threat. Yuri managed to steal an operational Nuclear missile silo, and by capturing Tech Power Plants from civilians throughout the city, launched it against the small Allied outpost, just like what happened with Chicago in the last war by Vladimir.

However, superior Allied tactics combined with a generous campaign contribution from Chairman Bing and their own super weapon - a Weather Control Device - are combined to allow the Allies to push through into Yuri's base and eliminate the silo. Whatever genetic software that the Massivesoft Corporation was forced to develop and before the company was liberated by remains unknown to this date, but although chances are that it was used in Yuri's Genetic Mutator devices.

Tanya was then rushed to England, where a situation was developing. The Soviet Commander had to deal with Yuri after recapturing London and now, Romanov was in grave danger and a loyal threat to that maniac which led into a daring rescue straight in Morocco.

Thought that he had suffered some defeats, he had other plans which rendered those defeats meaningless, one of which was the capture of German scientist Albert Einstein. Yuri's plan was to force Einstein to work for him on the Psychic Dominator program, hoping to accelerate its eventual completion and before he was burnt out from both ends.

With an explanation from Lieutenant Eva Lee and the German Chancellor, agent Tanya and a team of Tank Destroyers was sent into recovering the doctor. They succeeded, and Einstein provided them with a parting gift, before he was taken away to a secure location via a Nighthawk helicopter. He sabotaged the prototype Psychic Dominator, so that it would eventually explode.

This meant that Allies would only get one shot with the captured device. Fortunately, a group of Yuri's vehicles were exhibiting parade-ground formations, which is tightly packed. Without compunction, the Allied commander used Yuri's own weaponry against him and by using both the Dominator and the funding of a nearby oil field in destroying his entire base.

Yuri was still far from beaten and had made a plan. Bringing his cloning program online, he was believed to be cloning Allied and Soviet leaders in Sydney, Australia. An order from a cloned world leader to surrender in front of Yuri would be devastating if their soldiers obeyed.

Allied forces, including Black Eagle jets dispatched from Korea, launched a counteroffensive. Yuri countered by cloning massive amounts of his Initiates and garrisoning them into buildings across the city. Ejecting someone from an occupied structure normally entails seriously damaging the entire structure and so by the end of the battle, Sydney was in utter ruins. However, superior Allied tactics ensured a destruction of the enemy base.

At this point, the Allies had reached their point in time when the Soviets had to surrender in front of their victors. Since Yuri was still at large, a top secret meeting of world leaders was planned to help with him. Unfortunately, Lieutenant Eva had been mind controlled by Yuri in tapping the Allied communications to the Commander who then would received the location of the top secret meeting to be held in London.

If Yuri couldn't clone the Allied and Soviet leaders, he would Mind control them and use them as his pawns. Determined in his effort to kill the world leaders, Yuri sent his best weapons: Floating Discs, Masterminds, and what remained of the Boomer Submarine fleet.

However, a brilliant Allied commander built up solid defenses in front of Parliament House, which prevented Yuri from making much headways into attacking the building. Later, Soviet forces joined the battle to be combined as Allied and Soviet forces destroyed Yuri's base.

Lieutenant Eva, feeling like a failure had briefly offering to tender her resignation until General Carville reminded her that she was still needed and wasn't the only person ever mind controlled. She went ahead to pinpoint the location of Yuri's transmission and triangulations confirmed that he was transmitting from Antarctica and an Allied attack, which included the use of a Soviet base was immediately planned.

The Allies launched their strike just after Yuri got there (assuming he ever left). Yuri attempted to deploy his last remaining Psychic Dominator as well as a newly built Genetic Mutator device, but limitations on the technology involved prevented them from firing too often. The Allied Commander made good use of this fact, and destroyed them before they could fire too many times. Allied forces, assisted by the technologies of both Allied and Soviet to which allowed 4 separate superweapons to be constructed, leveled Yuri's bases. 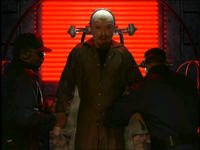 Yuri, moments before being sealed in the Psychic Isolation Chamber.

They even captured Yuri, although how they distinguished him from his many clones remains a mystery. He was placed in a 'Psychic Isolation Chamber' to which prevented him from mind controlling anyone - not even a fly. At that moment, the timelines began to merge. As professor Einstein explained, "One series of events must take precedence over the other!".

Fortunately, the new timeline replaced the previous timeline - rather than Yuri being alive and making an unwelcome announcement to President Dugan, it was General Carville's emergence that became important. Exact details as to the timeline merging remains classified.

Little did the Allies suspect that the Soviets were able to capture the details and specifications of the Allied Time machine for themselves. While the Allies declared full victory, an era of peace over the occupied Soviet Union and the now destroyed Yuri faction, the Soviet Underground secretly plotted for one final war against the Allied Nations. In hopes of restoring their communism on a world scale, however this would prove to be a fatal mistake as the war against the Soviets had in mind a much greater twist than ever imagined...

Instead of the Allies traveling back in time, it was the Soviets who hijacked the Time Machine in San Francisco and traveled back in time to destroy Yuri and change the course of the war.

Note that the Soviet Campaign is considered non-canonical in regards to storyline continuity of the Red Alert Universe.