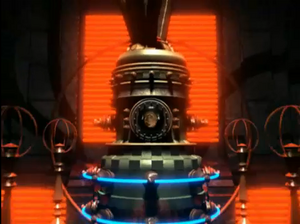 The Psychic Isolation Chamber was a device created by Albert Einstein for the Allies. The machine was encountered after the defeat of Yuri's army at the end of the Psychic Dominator Disaster. It was created as a prison to hold the psychic prisoner Yuri as well as prevent him from using his powers.

This device no longer exists due to the removal of its inventor and events of the War of the Three Powers, though the Allies developed the Cryoprison for incarcerating political enemies.